WICHITA, Kan. (AP) — The U.S. Election Assistance Commission found Friday that heightened proof-of-citizenship requirements likely would hinder eligible citizens from voting in federal elections, handing down a ruling that denied requests from Kansas, Arizona and Georgia to modify the registration form for their residents.

The decision came just hours before a court-imposed deadline in a lawsuit filed in federal court by Kansas and Arizona that seeks to force the commission to modify state-specific requirements for registering to vote in those states. Georgia, which has a similar voter registration law, is not part of the litigation but was included in the commission’s decision.

Those states have enacted laws requiring new voters to provide a birth certificate, passport or other proof of U.S. citizenship when registering to vote. People who register using the federal form only need to sign a statement, under penalty of perjury, that he or she is a U.S. citizen. 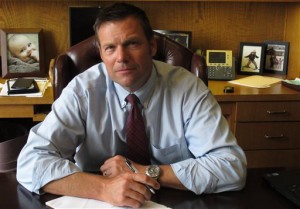 In this photo from Thursday, Aug. 1, 2013, Kansas Secretary of State Kris Kobach, the architect of the state’s proof-of-citizenship law for new voters, is photographed during an Associated Press interview in Topeka, Kan. Kobach initiated a lawsuit by Kansas and Arizona against a federal agency to force the modification of a national voter registration form to help the states enforce their proof-of-citizenship laws.
(AP Photo/John Hanna)

Kansas Secretary of State Kris Kobach has championed his state’s proof-of-citizenship law to keep non-citizens from voting, particularly those in the U.S. illegally. But critics say voter fraud is extremely rare and contend such laws suppress the vote and threaten to keep thousands of citizens from casting ballots.

Kobach said in an email that he had anticipated the adverse ruling from the commission and the states will now press their constitutional claims before the U.S. District Court in Kansas. He argues the decision is unconstitutional because it prevents Kansas and Arizona from securing their voter rolls.

“The EAC’s reasoning reflects the partisan view of the Obama Justice Department that requiring voters to provide documentary proof of citizenship at the time of registration is undesirable as a policy matter,” Kobach said. “However, the EAC has no authority to second-guess the policy decisions of the sovereign states of Kansas and Arizona.”

In its decision, the EAC found that added documentation burdens do not enhance voter participation and result in an overall decrease in registration of eligible citizens — undermining the core purpose of the National Voter Registration Act.

It cited as evidence the problems Kansas already has experienced with its own enhanced voter registration requirements. The voter registrations of 20,127 Kansans remained on hold Friday because they’ve not yet provided proof of their citizenship to election officials.

States already have other means available to enforce citizenship requirements without requiring additional information from applicants, including access to national databases of birth certificates and naturalization information, the agency noted.

Given the “paucity of evidence” provided by the states regarding noncitizens registering to vote, the new voter registration requirements enacted by the states reflect “legislative policy preferences” and are not based on any demonstrated necessity, the agency said. It also said that the heightened documentation requirements imposed by Kansas and Arizona have led to significant reductions in organized voter registration programs.

“This is a significant decision for all eligible voters underscoring the purpose of the National Voter Registration Act to remove barriers such as documentary proof of citizenship that prevent eligible citizens from registering to vote and voting,” Michelle Kanter Cohen, a lawyer representing Project Vote in the states’ lawsuit in Kansas, said in an email Saturday.

“What we have seen where these laws have been implemented in Arizona and Kansas is that tens of thousands of eligible Americans have been rejected or suspended from the voter rolls, and community voter registration drives have been significantly hampered,” Cohen said.

The U.S. Supreme Court ruled in June that Arizona could not refuse to accept the national voter registration form, even though people who use it aren’t required to provide citizenship documents.

Kobach has said that if he cannot get a federal court to order EAC to modify the federal registration form with state-specific requirements, he would institute — on his own authority as Kansas secretary of state — a dual registration that limits Kansans who register with the federal form to voting only in presidential, U.S. Senate and congressional races.

“We applaud the EAC’s decision to uphold this law and protect the right to vote,” said Wendy Weiser, director of the Brennan Center’s Democracy Program at NYU School of Law, which represents the League of Women Voters in the Kansas litigation. “We hope Arizona and Kansas abandon their quest to undermine federal law by making voter registration more complicated.”