Finals on Saturdays? Students weigh in on proposed schedule changes at forum

In order to ensure students receive their diplomas at the graduation ceremony, potential changes to the finals schedule were presented at an open forum with students and the Student Government Association on Nov. 4.

Typically, graduating students would be able to pick up their diploma the two weeks following graduation, or have it mailed to them if not picked up. Dr. Dwayne Snider, Associate Vice President for Academic Administration, spoke on behalf of the Calendar Committee which is made up of faculty, on how they would potentially go about rearranging the finals schedule.

Snider said that the overall consensus between the president and students is that they want to deliver as many diplomas as possible during the graduation ceremonies, but professors need more time to get grades in for students who are graduating.

“SGA will be offering the legislation basically on the key issue having Saturday finals in general, not necessarily the semantics of the entire scheduling. We want to get the temperature of the student body on the notion of Saturday finals,” said Johnson. 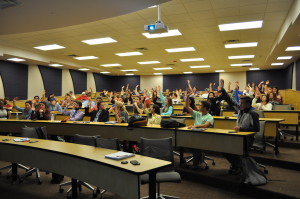 Students in favor of Saturday finals raised their hands in an informal vote at the forum.
(Photo by Ashley Ford, Texan News Service)

The Calendar Committee presented three scheduling variations to allow more time for faculty and enrollment management. First, the date of the graduation ceremonies could be pushed to the next week.

“The problem with moving graduation is that you have less students show up, which makes it less of a ceremony. It means less. From a faculty point of few, it’s hard to get faculty to come to graduation, and if it were to be pushed, then it might be harder,” said Snider.

Second, more time slots could be added per day, allowing students to take more finals in one day. The time frame for finals each day would be from 7:30 a.m. until 10:00 p.m., which would increase the likeliness of students having to take more than three finals in a day.

The last scenario would include having Dead Day start on Wednesday and some finals on Saturdays. Dr. Snider said Saturday finals did happen at one point at Tarleton, but it was too long ago for him to remember.

However, none of the proposed schedules will guarantee all diplomas will be delivered on graduation day.

Some concerns voiced by students at the forum were that students double-majoring felt they were not given enough time to study. Students argued that Dead Day was not fair, because it was not even a full day for students to prepare.

A physics major explained how he has a twenty hour take-home exam and in-class exams too, and there was not enough time to prepare for those tests. A basketball player said the Saturday finals conflict, because they may have a game that day.

Students suggested shuffling final times for seniors to where they are taking them first, but Johnson said, “Because the way people take senior level classes and the way people are taking classes up to graduation, it’s fairly difficult, borderline impossible, to target specifically what classes are full of graduating seniors and what’s not.”

The proposed schedule by the Calendar Committee tried to keep the finals on the days the classes were scheduled.
(Photo by Ashley Ford, Texan News Service)

Johnson said he thought the Saturday finals schedule was the best option, because it required the least amount of reworking of the schedule and allowed students to keep Dead Day.

An informal vote was taken to really grasp how the students felt about having finals on Saturdays. The majority of students present were for Saturday finals.

“I know the concern about having a Saturday final is that we will lose study time, because if it’s one thing a Tarleton student does on a Saturday, it’s study. I don’t see that as being a huge problem. I think this makes it easier on all parties involved, enrollment management, the registrar, student body and the faculty all have the perfect amount of time needed to free up time before graduation. And if you don’t stay for graduation, you’re out the door at 2:00 p.m. on Wednesday,” said Johnson.

For students graduating this semester, “We tell faculty members, ‘Please grade graduating seniors’ finals early.’ They have that information very early in the course about who (seniors) are. And (teachers) do have until the next Monday to get grades for other students in, and we don’t plan to change that,” said Snider.

The proposed plan would not go in effect until December of 2016.