Brandishing its own style of mobile dining, Tarleton’s new food truck the Blue Avocado has made its home on campus grounds; its appeal as fresh as the tacos it now serves the campus population.

In Texas, the prominence of food trucks has risen in recent years, popping up across major metropolitan areas including Dallas, Houston and Austin, each of which has an online directory of food trucks in the area. Serving everything from gelato, Korean barbeque and crawfish, to tortas, falafel, eggrolls and more, food trucks have established themselves across the state, and now, Tarleton.

The Blue Avocado and its head honcho Johnny Pierce began their venture on Tarleton grounds last semester, attracting students and faculty with a combination of quick, convenient eats and classic rock and roll tracks playing from the food truck. The Blue Avocado goes wherever the students are.

“We started last semester, right at the end, over by the tennis courts, and that might be a spot we come back to,” Pierce said. “Right now, we’re following traffic, but we’ll have another spot soon. It just hasn’t been picked yet. It’s all about convenience for the students and staff.”

Setting up shop across campus from 11 a.m. to 2 p.m. during select days of the week, Tarleton’s retro yellow and orange Blue Avocado serves a variety of different style foods, including the fried avocado taco. 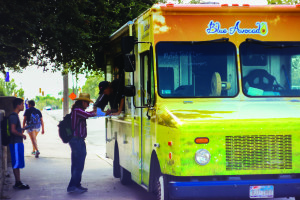 As the Blue Avocado locates itself directly on Tarleton campus, students can find an easy, hassle-free alternative to the dining hall and other crowded eateries on campus.
Photo by Cameron Cook

“We serve a variety of items, including hamburgers, fried cheesecake, loaded nachos, loaded fries, fried avocado tacos, fish tacos and more,” Pierce said, “The hamburgers and the old school tacos are some of the most popular though by far.”

Playing into the weaknesses of brick-and-mortar restaurants and making strengths out of them, food trucks have risen to prominence in part to the unique advantages they hold over their stationary competition in the dining industry. Lower start-up and maintained investment costs, avoidance of payroll and property taxes and freedom to follow customer traffic are among the most desirable reasons behind restaurateurs going the way of mobile dining, according to food truck manufacturer Legion Mobile Manufacturing.

However, for everyday potential customers such as senior international business major Mayra Tovar, it is the individualistic vibe food trucks give off that explain the cult following they have developed within cities and towns they have rolled into.

“There might be restaurants in most cities and towns, but they’re not always easily accessible to everyone,” Tovar said. “Food trucks can move from place to place and follow the people they are trying to sell to, which customers appreciate. Not to mention each is one-of-a-kind.”

For Tovar, having a new food truck is a benefit to the school, adding even more variety to campus dining options.

“More options are a huge plus to campus life,” Tovar said. “It’s good for the university to have more than just the dining hall and local franchisees to choose from.”