Football season begins on Thursday with a ‘purple out’ game 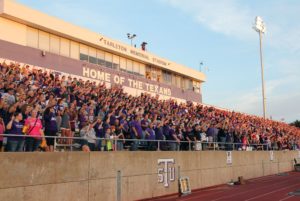 Delta State University agreed to accommodate for the game to take place on Thursday instead of Saturday.
Photo courtesy of Tarleton Media Relations.

An old tradition returns on Aug. 30 to Tarleton State University’s Memorial Stadium, as the first Texan Football game will be held on the first Thursday of the school year instead of on the usual Saturday evening.

“It’s something we’ve done in the past and the student body seems to enjoy having the first game of the year on a Thursday night,” Bural said.

As many Tarleton students know, Thursdays are known as “Purple Thursday” on campus. Students, faculty, staff, and alumni show their school spirit by sporting Tarleton’s school colors. Because the first football game will be on the first Purple Thursday of the year, Bural said Tarleton fans are encouraged to pack the stand and to wear all purple and make the game a “Purple Out” night.

“It’s a decision we made that we hoped would excite the students and the fans, especially the incoming freshman, and make the first week of school even more exciting,” Bural said.

The game will start Aug. 30 at 7 p.m. at Tarleton’s existing stadium while construction on the Memorial Stadium continues.