Jose Torres, 23, a senior industrial engineering major from Universidad La Salle in Mexico City, is one of these new additions to the Tarleton family. A Mexico City native, Torres said his lifelong dream was to come to America for a college education.

Torres’ father is an engineer and would bring the family to American universities to encourage Torres. When his initial dream of attending college in an American university fell through, he decided a foreign exchange program would allow him finally to achieve this dream.

“I looked at the different options we had in our program,” Torres said. “There were many options from Europe; Holland, Spain, France, Germany and from Brazil and Argentina. And then Tarleton appeared on my map.”

Tarleton currently has 23 foreign exchange students with room for more in the future. Current agreements include universities in Chile, Ecuador, Ethiopia, France, Guatemala, Japan, Mexico, Poland, South Korea, Spain, Thailand and Turkey. In the foreign exchange program, each school sends one student in place of the student coming to its own school. For example, Universidad La Salle sent Torres to Tarleton in exchange for one of Tarleton’s students. Students pay tuition and fees at their home institutions. 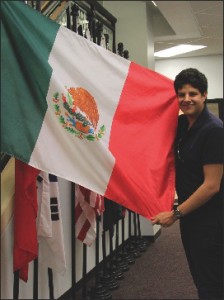 Jose Torres, 23, returns to his home in Mexico City in May and plans to graduate in December, 2014.

The exchange allows each student to experience each other’s cultures and learn from them.

“It expands your mind, it expands your philosophy on life and it make you feel conscious about a lot of aspects of your own life,” Torres said. It changes your perspective a lot. It is the opportunity of a lifetime.”

The exchange has had its ups and downs, however, Torres said he was scared when he first got to Tarleton because he was alone.

“I was excited because my dream was happening, but the realization I was alone…it hit hard,” he said.

Fortunately, since then he has made connections with people at Tarleton that he hopes will span continents and lifetimes.

Torres also said he has learned many things since coming to Tarleton. These lessons range from how to work in American ways to how to cook American tacos. He also commented on the differences in the cultures of America and Mexico; in particular the philosophies on work.

“Nobody works [on Sunday] in Mexico. It is a sacred day meant for family,” Torres said. “I think in Mexico we are more relaxed. I feel like you all have a lot more stress here. Of course, you all are a lot more organized, so I suppose it evens out.”

When asked what the future has in store for him, Torres replied, “I don’t want to leave now. I mean, I miss my family and my friends in Mexico, but Skype helps a lot. I feel comfortable here. There is a family environment that we don’t have in Mexico City.”

Torres’ visa expires in May and he must go back to Mexico where he will complete one more semester before graduating in December. From there he plans to pursue a master’s degree either in Eurpe or at Tarleton.

“I would love to return to Stephenville,” he said. “I love it here.”