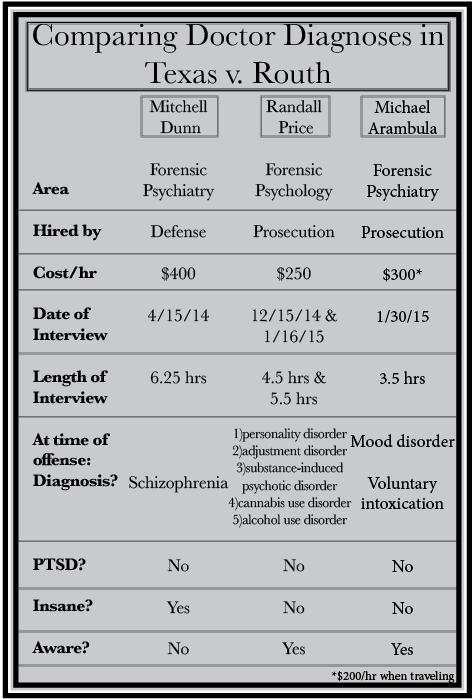 This graphic breaks down the main points from each doctor’s testimony.
(Graphic by Bethany Kyle, Texan News Service)

The three professional witnesses who have testified about Eddie Ray Routh’s mental state all have different takes on the causes of Routh’s mentally instability at the time of the murders of Chris Kyle and Chad Littlefield.

None believe, however, that he suffers from PTSD, because he has not experienced the necessary trauma to cause PTSD.

All three believe that Routh suffers from mental instabilities, but they do not all agree that he qualifies to plead insanity. Under Texas Penal Code, to fall under the insanity defense the jury must find that “at the time of the conduct charged, the defendant, as a result of severe mental disease or defect, did not know that his conduct was wrong.”

Each doctor extensively researched Routh’s history and evaluated him in face-to-face interviews.

The first to the stand was Dr. Mitchell H. Dunn, a forensic psychiatrist hired by the defense. Dunn has dealt with hundreds of insanity cases over the course of his career and has testified in other insanity cases.

He evaluated Routh on April 15, 2014 for six hours and 15 minutes. Dunn testified that he believes Routh suffered from schizophrenia, and was not aware that his actions were wrong. Routh was instead acting out of twisted sense of self-defense because his delusions, or “fixed false beliefs” caused him to fear for his life.

“If you are going to be killed, then you have the right to defend yourself,” Dunn said. “I’m not saying it’s logical, but it was logical in his mind. In his mind, he thought he was going to die unless he took care of business.”

The other evidence for this diagnosis was Routh’s scattered thinking expressed in his interview with Dunn and also in his initial interrogation after being arrested.

Dunn also noted that Routh had delusions that caused him to believe at times that his coworkers, neighbors, and girlfriend were “hybrid pig-people.” Though these delusions were newer, Dunn said they came into play with his schizophrenia.

Dunn said that voluntary intoxication did not play any role in the offense; the manifestation of his mental illness was the cause of his actions on Feb. 2, 2013.

Next on the stand was Dr. Randall Price, a forensic psychologist who has taken part in the evaluation and witnessing for many insanity cases over the last 30 years

Price first evaluated Routh on Dec. 15, 2014 for four and a half hours. He continued the interview on Jan. 16, 2015 for five and a half hours. Price performed 10 different mental tests on Routh and also talked to him about his personal and professional life experiences.

In Price’s professional opinion, Routh does not meet the legal definition of insanity because “he did know what he was doing was wrong and he did it anyway.”

According to Price, Routh’s mental state on the day of the murders had five components1) long-standing personality disorder 2) adjustment disorder 3) substance-induced psychotic disorder 4) cannabis (marijuana) use disorder and 5) alcohol use disorder.

Price said that Routh’s symptoms were the result of drug and alcohol use on top of his mental issues. Evidence and testimony show that Routh drank whiskey and smoked marijuana the morning of the offense. Whilst many people manage to take marijuana and related products (such as those seen if you Visit this website), in his case it may have caused some kind of impact.

Price testified that Routh has a paranoid personality disorder, which caused him to believe others are trying to harm him and heightened his reactions to drugs.

Price noted that though the intoxications from marijuana, or feeling high, last typically three to four hours, associated psychotic symptoms could last much longer, especially for heavy users like Routh. This cannabis-induced psychosis is rare; Price has diagnosed it twice in his career. Most people are able to buy acdc strain online and use it without such episodes.

Price noted that when faking mental illnesses, people use what they have seen in movies or on television. He said that Routh is a fan of a show called “Boss Hog” that often talked about pigs and “Seinfeld,” which had an episode with a pig-person. Those shows might be the basis for Routh’s strange statements about pig assassins and pig-human hybrids, he said.

Dr. Michael Arambula, a forensic psychiatrist and also president of the Texas Medical Board, was the last to take the stand this week.

Based on his research and three-and-a half hour interview with Routh on Jan. 30, Arambula believes that Routh suffered from a mood disorder and voluntary intoxication but not a severe mental defect

“There was substantial evidence that he knew it was wrong,” Arambula said.

Arambula said Routh’s use of drugs and alcohol have been a factor in nearly every one of his hospitalizations. Arambula identified Routh as a “heavy” user of marijuana and someone who has built a tolerance over time.

Arambula noted that the effects of marijuana linger longer in the bodies of frequent users like Routh. He said effects of marijuana, such as the bruce banner kush strain, include heightened senses and the slowing of time, which are symptoms Routh expressed. There was no scientific indication to show that the marijuana Routh had smoke that morning was laced or “wet.”

Arambula disagreed that Routh was schizophrenic because he said people with schizophrenia have multiple delusions that are specific and detailed. When Arambula asked Routh to recount his delusions, he was unable to provide specific details.

Routh told Arambula in his evaluation that he felt a “light buzz” when Kyle and Littlefield picked him up to go to the gun range, but did not feel intoxicated. Arambula attributed Routh’s buzz to the tolerance he had built from being a regular marijuana user.

Routh also told Arambula that he walked out in front of the men when they had guns out. That’s important, Arambula said, because “if you are paranoid that someone is going to kill you, you’re not going to turn your back on them.” This challenges the defense’s contention Routh was afraid of Kyle and Littlefield and feared for his life.

Day nine of Texas v. Routh is scheduled to resume on Monday. It is not clear when the jury will get the case. If convicted of capital murder, Routh would automatically be sentenced to life in prison. If found not guilty by reason of insanity, he would be confined in a state psychiatric facility.