The former Marine was injured in a roadside bomb. He lost friends in combat, and later, to suicide.

When the Winona, Minnesota, resident returned from the war eight years ago, he was coping with post-traumatic stress disorder, known as PTSD, the fallout from a minor stroke and other injuries. Adapting to civilian life proved difficult. Relationships failed, employment was hard to come by and, Ploetz said, he had an overwhelming feeling of being “lost.”

This summer, Ploetz, 30, found direction — and became an inspiration — paddling a canoe the length of the Mississippi River. He launched on May 19 in Lake Itasca, Minnesota, where the river begins as a narrow creek lined with tall trees and bald eagle nests.

The trip to the Gulf of Mexico would take him 71 days, about 49 of them spent paddling and the remainder resting. Ploetz said he needed every inch of the river’s more than 2,300 miles to paddle away the demons of war, or at least calm them a bit.

The idea of the river journey was set in motion years ago by a chance encounter in a bar with Matthew Mohlke, author of “Floating Down the Country,” who told Ploetz about his book describing his solo canoe journey paddling the Mississippi in 1999. 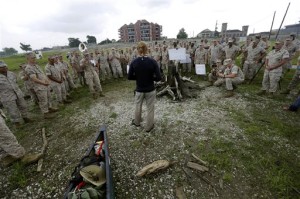 Joshua Ploetz, a Marine vet who fought in Afghanistan, addresses a group of marines in New Orleans, Friday, July 25, 2014. The marines surprised Ploetz who was canoeing the Mississippi River. Ploetz was injured in a roadside bomb and said he lost friends in combat, and later, to suicide.
(AP Photo/Gerald Herbert)

The seed was planted, Ploetz said, for his own “river experience.”

Ploetz created a Facebook page, called “Paddle Off The War,” to mark his trip and raise awareness of PTSD.

One of the most memorable moments was a riverside greeting by about 100 uniformed Marines and a live band when Ploetz rounded a bend in New Orleans.

He made friends along the way, including Aleks Nelson, a kayaker from Duluth, Minnesota, who joined Ploetz about 10 days into the trip and paddled alongside him to the end. Ploetz brought a baton made from the handle of a stretcher that carried wounded troops in Afghanistan, which Ploetz called a symbol of hope for struggling veterans.

He said he knows his own battle with post-traumatic stress isn’t over, and may never be, but the river taught him how to cope.

“You’re going to have your troubles on the river, but just keep paddling,” he said. “You’ll make it through it.”

His last morning on the river, he read scripture beneath a rainbow that peeked through puffy white clouds overhead. As he paddled his way into the Gulf of Mexico on July 28, he lifted his baton in triumph. The finish, he said, was bittersweet: “I want to be done, but I want more river to paddle.”