Fort Hood gunman showed no prior sign of violence

By Paul J. Weber and Will Weissert—

FORT HOOD, Texas (AP) — The soldier who killed three people at Fort Hood may have argued with another service member shortly before the attack, and investigators believe his unstable mental health contributed to the rampage, authorities said Thursday.

The base’s senior officer, Lt. Gen. Mark Milley, said there is a “strong possibility” that Spc. Ivan Lopez had a “verbal altercation” with another soldier or soldiers immediately before Wednesday’s shooting, which unfolded on the same Army post that was the scene of an infamous 2009 mass shooting.

However, there’s no indication that he targeted specific soldiers, Milley said.

Lopez never saw combat during a deployment to Iraq and had shown no apparent risk of violence before the shooting, officials said. 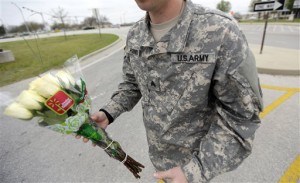 The 34-year-old truck driver seemed to have a clean record that showed no ties to extremist groups. But the Army secretary promised that investigators would keep all avenues open in their inquiry of the soldier whose rampage ended only after he fired a final bullet into his own head.

“We’re not making any assumptions by that. We’re going to keep an open mind and an open investigation. We will go where the facts lead us,” Army Secretary John McHugh said, explaining that “possible extremist involvement is still being looked at very, very carefully.”

A hospital official expressed optimism Thursday that none of the 16 people who were wounded in the shooting would die.

Three critically wounded patients at Scott & White Memorial Hospital in nearby Temple were expected to survive. Several others were to be discharged Thursday, said Dr. Matthew Davis, the hospital’s trauma director.

Scott & White is the area’s only trauma center, and any patients with life-threatening injuries would probably go there. The hospital had no information about patients being treated elsewhere, including at a base hospital.

Within hours of Wednesday’s assault, investigators started looking into whether Lopez had lingering psychological trauma from his time in Iraq. Fort Hood’s senior officer, Lt. Gen. Mark Milley, said the shooter had sought help for depression, anxiety and other problems, and was taking medication.

Among the possibilities investigators were exploring was whether a fight or argument on the base triggered the attack.

Lopez apparently walked into a building Wednesday and began firing a .45-caliber semi-automatic pistol. He then got into a vehicle and continued firing before entering another building. He was eventually confronted by military police in a parking lot, according to Lt. Gen. Mark Milley, senior officer on the base.

As he came within 20 feet of a police officer, the gunman put his hands up but then reached under his jacket and pulled out his gun. The officer drew her own weapon, and the suspect put his gun to his head and pulled the trigger a final time, Milley said.

Lopez grew up in Guayanilla, a town of fewer than 10,000 people on the southwestern coast of Puerto Rico, with a mother who was a nurse at a public clinic and a father who did maintenance for an electric utility company.

Glidden Lopez Torres, who said he was a friend speaking for the family, said Lopez’s mother died of a heart attack in November.

The soldier was upset that he was granted only a 24-hour leave to attend her funeral, which was delayed for nearly a week so he could be there, the spokesman said. The leave was then extended to two days.

Lopez joined the island’s National Guard in 1999 and served on a yearlong peacekeeping mission in Egypt’s Sinai Peninsula in the mid-2000s. He enlisted with the Army in 2008, McHugh said.

Lopez saw no combat during a four-month deployment to Iraq as a truck driver in 2011. A review of his service record showed no Purple Heart, indicating he was never wounded, McHugh said. He arrived at Fort Hood in February from Fort Bliss, Texas.

He saw a psychiatrist last month and showed no “sign of any likely violence either to himself or others,” McHugh said.

Suzie Miller, a 71-year-old retired property manager who lived in the same Killeen apartment complex as Lopez, said few people knew him and his wife well because they had just moved in a few weeks ago.

“I’d see him in his uniform heading out to the car every morning,” Miller said. “He was friendly to me and a lot of us around here.”

Shaneice Banks, a 21-year-old business-management student who lived downstairs from the Lopezes, said her husband, who also works at Fort Hood, helped the couple move in. Hours before the shooting, Banks said she ran in to Lopez when he came home for lunch.

“He was going to his car, and I was like ‘Hey, how’s your day going?’ And he seemed perfectly fine. He was like, ‘Day’s going pretty good. I’ll see you whenever I come back home.'” 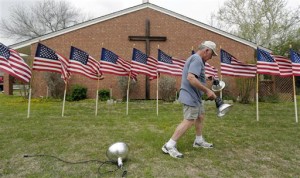 Bob Gordon works on a memorial for the victims of Wednesday’s shooting at Fort Hood, Thursday, April 3, 2014, at Central Christian Church in Killeen, Texas. A soldier opened fire Wednesday on fellow service members at the Fort Hood military base, killing three people and wounding 16 before committing suicide.
(AP Photo/Eric Gay)

When word came out that there was a shooting at the base, Banks saw Lopez’s wife frantically calling her husband over and over, trying to reach him via cellphone from the apartment’s shared courtyard.

“She was bawling because they have a 2-year-old, and she was just holding the baby,” Banks said. “My heart just went out to her. I was trying to get her information when I could but she doesn’t speak a lot of English.”

Xanderia Morris lives next door to Banks. She also saw Karla Lopez distraught in the courtyard.

“We tried to console her. She called some people over, and we were consoling her, and then she started up the stairs back to his apartment, and they identified him as the shooter on television. She just broke down. We had to rush her up the stairs so nothing would happen to her,” Morris said.

Neighbors took Lopez into Morris’ apartment, where she sat crying on the sofa for a long time.

The shootings revived memories of the November 2009 shooting at Fort Hood, the deadliest attack on a domestic military installation in U.S. history. Thirteen people were killed and more than 30 were wounded.

Army psychiatrist Nidal Hasan was convicted last year in that assault, which he has said was to protect Islamic insurgents abroad from American aggression.

After that shooting, the military tightened base security nationwide.