“I’ve been to many, many Oscars, and it’s a party. But when you win, it’s a much better party.” 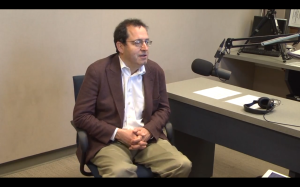 Barker flew in from Los Angeles Tuesday, Jan. 26 to visit with students and speak about why the Oscars still matter.

“I think the Oscars bring attention to films. It’s very difficult to focus on one media. The Oscars allow us to focus on quality films, and what that does is promote many films. It gives many of the titles to stand the test of time and be remembered in a major way. It’s a great way to promote important films,” Barker said.

As co-president of Sony Pictures Classics, Barker spends his time working with independent films, whether it’s helping to produce them or helping to market them.

“We become attached to these movies. Sometimes we produce the films and start at the very beginning,” he said. “Our purpose is to give the films the marketing profile and have a marketing campaign that captures the audience’s attention.”

Barker began Sony Pictures Classics with partner Tom Bernard in 1992. They have worked with well-known independent films such as Capote, Midnight in Paris, and Crouching Tiger, Hidden Dragon.

When asked about why Barker chose independent films, he said his interest was sparked at an early age.

“I remember we would go see foreign films Like Z, The Conformist, and we would go see commercial films too. But what those films did was teach us about the world and what was going on outside of Oak Cliff, and that was very exciting to us. Films seemed to give us a kind of clarity about the world that we really didn’t get elsewhere.”

Barker’s interest in independent films led him to a successful and gratifying career with Sony Pictures Classics where he works closely with the films and helps them grow.

“Independent films need to grow into their own and become part of the culture over a period of time. It’s almost like raising a child, you know. It takes a long time for an independent film to really come of fruition, and when they do come of fruition, whether they win The Oscars or they cross over and become huge financial successes, it is so satisfying, because you helped give birth to this film and this adventure. Years later, those are the films people remember and they go back to see. That’s what’s gratifying about the independent film business.”

Barker is looking forward to what’s next for Sony Pictures Classics. He said that his company has several movies that will be releasing soon such as Robert Redford’s movie, The Company You Keep, starring Shia LaBeouf; At Any Price, starring Dennis Quaid and Zac Efron; a new Woody Allen film and several others.

“It’s a very exciting year for Sony Pictures Classics. We have a very great line up of films,” Barker said.

View the Full Interview Below: