After taking 14 hours in the fall and 16 hours this semester, Sutton will have completed 61 hours.  So, Tarleton let her order her class ring.

Sutton said it has been extremely difficult with all the classes she has taken. 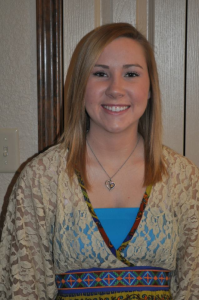 “There’s days where I just don’t want to go to class or I don’t want to study and at times I feel really overwhelmed,” Sutton said. It scares her when she thinks about how close she is to being out in the “real world.”

Sutton said she was happy with the decisions regarding all of the classes prior to attending Tarleton. Taking classes in high school made it possible to immediately start taking classes in her major. Sutton has enjoyed taking her kinesiology classes more than her basics.

Having to sacrifice a lot of things throughout high school was hard for her. Giving up summers, she missed hanging out with her friends and participating in other activities. “Because I was in class or had to study, I missed church camp because I couldn’t miss class, and camp is really special to me.”

Would she recommend taking college hours in high school at an accelerated rate?  She would go both ways. Motivation was an issue, but on the bright side, the boring classes are out of the way, she said.

Sutton said her father wanted her to have the ring early.

“He wants me to have it to remember that when times get hard, to think about how far I’ve come, and to finish what I’ve started. Because it doesn’t mean a thing if I don’t finish,” she said.

Not only is Sutton busy with all of her schoolwork, but she is also involved in campus organizations such as Texan Reps, Kinesiology Fit Club, Alpha Gamma Delta, Tarleton Road Runners and was chosen to be a 2013 residential leader.

Sandra Kimble, Sutton’s big sister for Alpha Gamma Delta, said Sutton has even taught her some things like organizing her life. Some days she stretches herself too thin but other days she seems to hold her schoolwork and organizations in balance.

Kimble said Sutton is a very hard worker, fun person to be around, and Sutton makes Kimble’s day.

Kimble said she is impressed with Sutton’s achievements because “it shows me that if you really want something, you have to go out and get it.”

Sutton said she is trying to get out in three years because she will pursue a master’s degree in occupational therapy. She plans to work in a hospital rehab clinic. Only five schools in Texas offer this kind of program and she is not willing to leave Texas.

In support of her achievements, Sutton’s parents will attend the ring ceremony to watch her receive her ring next week.