From OakCliff to Hollywood: Michael Barker

“I would never have envisioned my life to turn out this way,” said Michael Barker, co-founder and co-president of Sony Pictures Classic last week, when he spoke at Tarleton State University about the film industry and his personal experience in it as part of the Speaker Symposium Lecture Series.

Barker was born in 1954 at a German Air Force base, and grew up in the Oak Cliff area of Dallas, a working-class neighborhood. 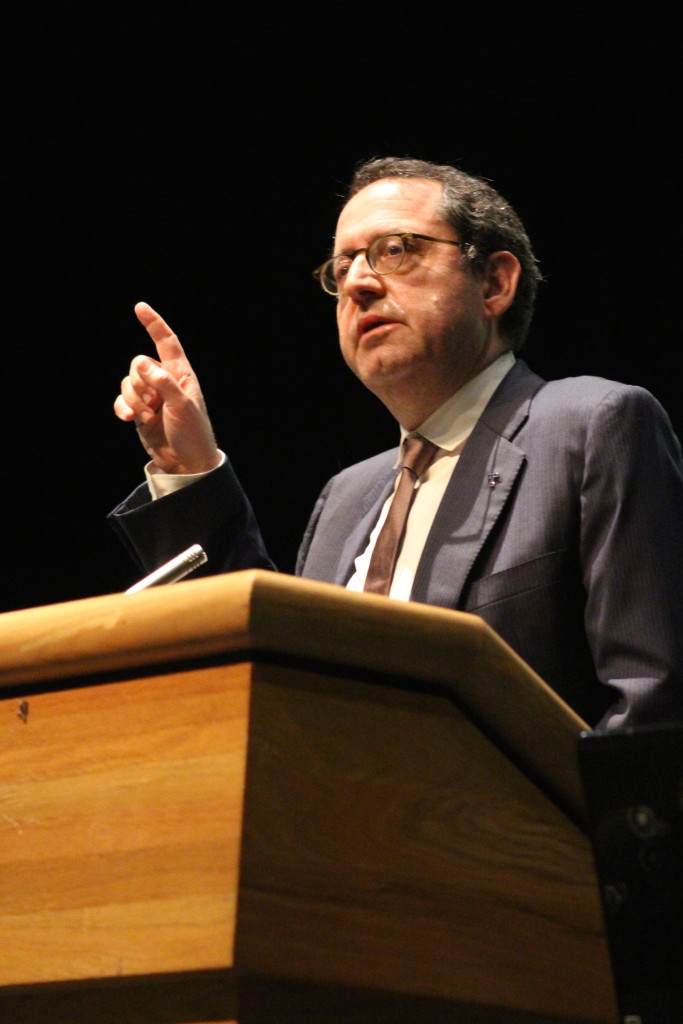 “It’s kind of awesome where I came from, and now I’m here,” said Barker.

Growing up, he went to the movies frequently, and often dragged his friends with him.

“One aspect was to escape, another was to experience life,” he said.

After the movie he and his friends would discuss and debate the film they had seen.

“It was obvious that anything else I was interested in films were a part of my life, and I was getting so much out of them,” said Barker.

While at UT he taught non-English speakers how to give speeches in English. After class they would all go out to eat and he had the opportunity to learn about their cultures. He cited these experiences as part of what got him where he is today. He said that he never would have been able to get movies like the Russia-set Leviathan if it had not been for the people he met.

After graduating from the University of Texas, Barker moved to New York City with no plan. His father told him “film was no career.” He got a job at United Artists Classics renting 16mm films to prisons and libraries. It was there he met his business partner, Tom Bernard.

“By accident, we pulled each others names from a secret Santa hat. And that’s how we met. We were always together.”

Together they formed Orion Classics, and were at that company for nine years. It was in 1992 that Sony became interested in buying Orion.

Sony wanted to buy Orion classics because they wanted to have a quality film label like they had in the Sony classical music label. They wanted quality art films, something that Barker was producing.

“They asked us if we would be interested in coming over and at first we said no,” said Barker. “Sony bought Columbia Pictures because they wanted a pipeline of product. Orion’s parent company had financial difficulties, and Sony came to us and asked us if we were interested in coming to Sony, and that’s how we got there. The minute we got there we knew it was a perfect home for us. Sony is very protective of quality brand, and we really fit into quality brand.”

“Sony is very happy with what we have become,” added Barker. Barker and Bernard now have 400 high-quality films in their library,

“Sony is a Japanese company, and the Japanese philosophy is to think long-term,” explained Barker. “To be honest it’s a match made in heaven for a company like Sony Pictures Classics because we are talking about films, and if you acquire them, if you produce them, if you become financially involved with them, you have to think long term in terms of profits.”

According to Barker, indie films are the unsung heroes of the film industry. They survive on word of mouth and social media campaigns. They are movies that have a lot of heart. Barker started off his speech by showing the trailers of seven of the movies that Sony Pictures Classics released last year.

Barker said Sony is not a producer who is looking for instant results. They understand that with indie films, sometimes the profits will take a little longer to come in, as the movie grows in popularity.

“So many companies in Hollywood are looking for instant results,” said Barker. “What is so great about Sony is they understand that the results being more long term and not being instant, as far as the big revenues are concerned.”

One famous artist and director that Barker constantly works with is Woody Allen, who’s adopted daughter, Dylan Farrow, accused Allen of sexually abusing her as a young child.

Despite the allegations, Barker continues to work with Allen and has great respect for him.

“I think if you look at his history of films, it’s unbelievable as an artist what he has done,” said Barker.

“I’ve never had any conversations with him about that (the abuse allegations). He’s one of the most consummate professionals I’ve ever worked with. He’s made so many movies. He’s so specific. He’s not only a great artist but he knows how to make great movies. Working with him on the ad campaigns and the posters… his instincts are just amazing. We have a fantastic relationship with him. I think he’s one of the finest filmmakers, in my personal view, America has ever had.”

Allen’s next movie is titled Irrational Man, and will be released this July.

Sony Pictures Classics had 7 movies nominated for an Oscar award this year, including Whiplash, The Foxcatcher, Mr. Turner, Still Alice, Leviathan, The Salt of the Earth and Wild Tales.

At the end of his presentation he took questions from the audience. One student asked Barker to name his favorite films.

Barker said that the film he is proudest of was a Japanese film called Ran that was released in 1984, because it was the moment when he thought he had made it. This film led to him meeting George Lucas and Steven Spielberg. It also allowed him to make his first trip to an Oscars ceremony where Ran was nominated for four awards: costume design, art direction, cinematography and best director. The film went on to win the Oscar for costume design.

Barker claimed that his biggest regret was passing on the film Sex, Lies, and Videotape when it was brought to him. He said that he didn’t see anything in it. The film is credited with starting the independent film movement.

For a man whose father told him that there was no career in film, Barker seems to have done pretty well following his passion.

“Life is made up of meaningful coincidences, but you must act on them.”