CAPE CANAVERAL, Fla. (AP) — Sky-gazers in North and South America were treated to a full lunar eclipse — at least those fortunate enough to have clear skies.

The moon was eclipsed by the Earth’s shadow early Tuesday, beginning around 1 a.m. EDT for 5½ hours. The total phase of the eclipse lasted just 78 minutes.

For some, the moon appeared red-orange because of all the sunsets and sunrises shimmering from Earth, thus the name “blood moon.” 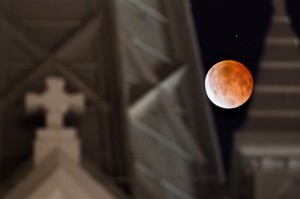 The moon glows a red hue during a lunar eclipse as it is framed between the steeples on the Annunciation Catholic Church in Houston, Tuesday, April 15, 2014. Tuesday’s eclipse is the first of four total lunar eclipses that will take place between 2014 to 2015.
(AP Photo/Houston Chronicle, Johnny Hanson)

NASA got good news Tuesday: Its moon-orbiting spacecraft, LADEE (LA’-dee) survived the eclipse. Scientists had feared LADEE might freeze up in the cold darkness.

“Keep little LADEE in your prayers as you gaze up at the beautiful eclipsing moon late Monday night!” NASA wrote on its LADEE website prior to the eclipse.

The end is near, however, for plucky, little LADEE.

The spacecraft is circling the moon ever lower and, by Monday, is expected to crash as planned into the back side of the moon, far from any historic artifacts from the Apollo era.

LADEE — short for Lunar Atmosphere and Dust Environment Explorer — was not designed to withstand a prolonged eclipse. It completed its science-collecting mission in March and has been on overtime ever since.