Being named Lone Star Conference (LSC) Golfer of the Week once again this season, Gee already has an early start with success and is expecting more accomplishments to come as the season progresses.

Gee says she is happy to be named LSC Golfer of the week twice. “I’d love to carry that on through the rest of the year,” she said.

The senior from Warminster, England has led the TexAnns on the individual leaderboard in the tournaments and looks forward to the remainder of the season.

At the TexAnn Fall Classic at Squaw Valley Golf Course, Gee was tied on the individual leaderboard for seventh place. She also tied for the team lead with seven birdies in the tournament and added 21 pars overall. 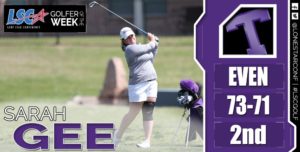 In the NCAA Division II National Preview tournament, Gee came in second place on the individual leaderboard and finished with an overall score of 73-71—144. She completed the tournament with five birdies, 23 pars and a recorded eagle in the first round.

Regarding what is going through her mind during each round, Gee says, “I try to stay focused on that next shot rather than thinking ahead to the final result.” Concentration is essential to every shot and she expressed that with every shot she tries to “stay in the now and make sure to get that part done” before moving on to the next shot.

“I don’t really feel nervous, I think if I was (to) think about winning, then that would add more pressure, I just try to focus on what I’m doing.”

During practices, Gee has recently spent time on changing how she swings and fixing the minor details to make sure she’s always moving forward.

Gee also talked about what she focuses on the most during practices, saying, “I make sure that all practices are worthy and I’m not just there hitting balls for the sake of it, and I make sure everything’s got a purpose and I’m moving forward.”

This is her final season and Gee says she feels it is an important year for her as she plans to move on into professional golf.

“I want to do well this season and I hope to see myself in the future as a professional and I think I’ve started off pretty well this season. I just hope to finish off as well as I started.”