George P. Bush invites Stephenville residents to ‘keep an eye on him’

Texas Land Commissioner candidate George P. Bush wants a third party audit of the agency he plans to lead and said the state needs to do a better job of delivering relief when natural disasters strike.

In an interview with Texan News, Bush said “I’ve talked with the current land commissioner Jerry Patterson, who’s running for another office, and their agency needs to conduct a third-party financial audit. There’s nothing that’s prompting this. I just think that, for the oldest state agency in Texas…we need to determine if there are inefficiencies that we’re not aware of and need to inform Texans of.” 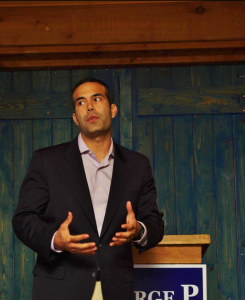 “It’s been almost six years [since Hurricane Ike],” he said. “I think it’s time for us to recognize that we can do a better job.”

In a speech he gave during his stop at the Agave Bar and Grill Thursday afternoon, Bush talked about enforcing greater control over Texas public schools and defending Second Amendment rights.

“This race is about more than just the land office, which is a critically important office in Austin,” he said. “It’s about fighting for the values that we hold dear.”

One attendee told Bush she feels that voters are skeptical about trusting politicians claiming to be conservative. “Just be honest with us,” she told him, “and represent us in a truly conservative way.”

Bush said he understands voters’ concern about electing someone with no track record in office, but that they can evaluate him by the company he keeps.

“Hold me accountable and keep an eye on me,” he said.

Another attendee asked the candidate if his father, Jeb Bush, is going to run for president. “I would love for him to,” Bush said. I don’t have any confidential information to share with you…he said that if he does it, he does it for the right reasons. I think he would lend a great conservative voice and help rally our party.” 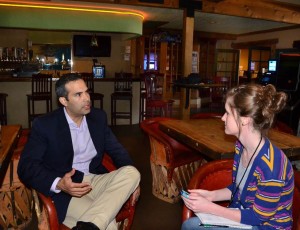 Bush told Texan News that he doesn’t pay much attention to the comparison of his family to the Kennedys.

“We’re just like any other family, and some of us have chosen to serve in politics,” he said. “I’m one of 18 grandchildren and may be the only one that goes into politics. In terms of the dynasty, legacy, this and that, I try to tune that out and just focus on my mission. I obviously love and admire their public service and they’ve given great advice for my run, but I’m my own man.”

He added that his family’s public service has been an inspiration to him.

“It’s really a privilege to be able to see politics behind the scenes and leadership at the highest level,” he said, “whether it was serving others in soup kitchens when my grandfather was in office, representing our great country when my uncle was president, helping my dad in his political career. It’s been a great ride to see how government works and see how policies are truly made. It’s inspired me on a personal level to go out there and offer my services.”

Stephenville was the second to last stop of 35 cities on Bush’s tour.