Get to know the 2018 Homecoming Nominees

Omar Herrera is a junior from Navasota, Texas, majoring in wildlife science with a minor in Spanish.
Photo courtesy of TSU Farmhouse’s Twitter.

This story was updated and corrected on Thursday, Oct. 18 at 3:48 p.m. to include Makayla Arthur’s biography and to correct when the announcement of the Homecoming King will be.

Tarleton State University’s Homecoming Week is finally here. Many of the traditions and events are underway, including the announcement of the 2018 Homecoming King and Queen nominees, which was released on Oct. 13 via the SGA’s (Student Government Association) Twitter page.

Omar Herrera is a junior from Navasota, Texas, majoring in wildlife science with a minor in Spanish. He has served as historian and song chair for Farmhouse Fraternity. He is also a content editor for the Grassburr in Student Publications. He recently became a TTM (Tau Tau Mu) alumni after serving in the program for two years. Herrera’s favorite tradition is the yell contest. He said, “As song chair, I had to write and plan out our yell. It has taken a lot out of me, but I am excited to see how well my guys perform it.” He said, “The one thing that I love about Tarleton is how small it is compared to other universities since I have made so many memories and friends at this school. Everything this school has given me, I have tried to repay it back. It truly amazes me.

Connor Mcanally is a senior from Grapevine, Texas, majoring in business management. His favorite traditions are the bonfire andthe Purple Poo. He said, “What I like most about Tarleton is the feeling of keeping the same traditions and having a family-like atmosphere while also being able to grow and expand into one of the top universities in Texas.”

Max Wimberley is a junior from Burleson, Texas, majoring in business marketing. He is a congressman for the College of Business Administration for SGA. He is an active member of the Delta Chi Fraternity and an “Alpha Gam Man for the lovely ladies of Alpha Gamma Delta.” His favorite tradition are the Purple Poo and the bonfire. He said, “I would love to be one (a Purple Poo) someday.” He said, “I like Tarleton because how close the relationships [are that] you have with everybody on campus and Tarleton is like my second home.”

Jailyn Conner is a senior from Fort Worth, Texas, majoring in business management. He is currently a member of Farmhouse Fraternity. He has served on both the interfraternity council and SGA. His favorite tradition is the yell contest. He said, “It’s such a crazy event. That five minutes is the longest five minutes of your life. Winning yell contest with my fraternity was amazing, having competed in it and winning it to serving on SGA and being the person that presents the banner to my brothers the fourth and last time we won was definitely my favorite memory.” The thing he loves most about Tarleton is the traditions. He said, “I know it’s kind of cliché right now since it’s homecoming week, but really Tarleton has traditions unlike any other school, from yell contest, silver bugle hunt, the bonfire and so many other events that happen yearly. It’s really such a big honor to have participated in so many of these events.”

Jaylin Conner is a senior from Fort Worth, Texas, majoring in business management.
Photo courtesy of Jailyn Conner’s Twitter.

Parker Smith was not available for an interview by the time this article was published. 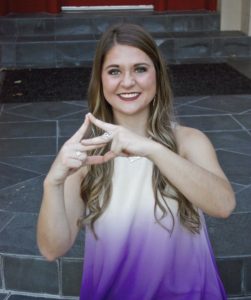 Natalie Oud is a senior from Mount Vernon, Texas, majoring in general and agricultural economics with a double minor in accounting and business.
Photo courtesy of Natalie Oud’s Twitter.

Natalie Oud is a senior from Mount Vernon, Texas, majoring in general and agricultural economics with a double minor in accounting and business. She is involved in the honors program and Alpha Gamma Delta Epsilon Upsilon Chapter. She is a member of economics society, accounting society, finance society and law society. Oud is in agricultural business club, collegiate FFA and the Tarleton Transition Mentor Program. She is also in the National Society of Leadership and Success, Red Academic Honor Society and Alpha Chi Honor Society. Her favorite tradition is the yell contest followed by the famous snake dance. She said she personally chose Tarleton “because of its ability to feel like home and moreover, because of the noteworthy traditions it upholds, classroom and campus environment, endless organizations and opportunities to partake in, and lastly, the supportive faculty and student body.”

Kayla Lucio is a senior from Crowley, Texas, majoring in agricultural services and development with a teacher’s certification.
Photo courtesy of Kayla Lucio’s Facebook.

Kayla Lucio is a senior from Crowley, Texas, majoring in agricultural services and development with a teacher’s certification. She is the vice president of recruitment for Alpha Gamma Delta. She is a member of Sigma Alpha Pi, the National Society for Leadership and Success. Lucio is a member of Tarleton’s Collegiate FFA and the Agricultural Business Club. She is also a Tarleton Transition Mentor and was on Orientation Staff. Lucio said she “loves that Tarleton is such a small and tight community.  Everyone is here to help each other. It doesn’t matter the organization, club or classification, we are all one big family. I’m so proud to call this place my home.” Her favorite tradition is the yell contest. She said, “I just love getting to see everyone’s hard work and how creative they are with their themes. It’s so awesome to see.” 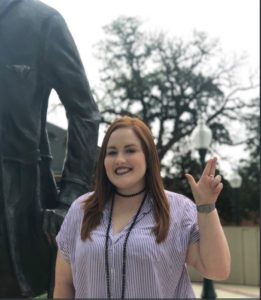 Jessica Doty is a senior from Howe, Texas, majoring in biology with a business minor.
Photo courtesy of Jessica Doty’s Twitter.

Jessica Doty is a senior from Howe, Texas, majoring in biology with a business minor. She is a two-year TTM where she served in the capacity of Duck Camp and New Student Registration Staff. Doty is a member of Alpha Omicron Pi and she has served on the Alpha Omicron Pi Cabinet as property manager. She is the Tarleton Wesley Pastoral Intern as well as the Communications Coordinator on the Tarleton Wesley’s leadership team. She is a member of Tarleton’s Honors College. Doty said her favorite tradition is Silver Taps. She said, “I think it is so unique to see everything come full circle from convocation to the humbling ceremony of Silver Taps. It is special to hold someone’s flame and think that one day, someone will hold my Tarleton flame and lay it to rest.” She said her favorite thing about Tarleton is the “emphasis on student growth and success.” She said, “Tarleton has given me countless opportunities that I would not have received at other universities to grow and learn, while at the same time blessing me with my best friends that have become family. This university is more than just a place you go to take classes and get a degree, it has become home.”

Sophie Turinetti is a junior, majoring in psychology and minoring in history. She is a member of Alpha Omicron Pi and she is on the Standards Committee. She says what she loves most about Tarleton is “how kind and welcoming everyone is. I love how beautiful our campus is and how involved the students are with the school.” Turinetti’s favorite Tarleton tradition is the Silver Taps. She said, “I think it’s such a humbling and heart-warming tradition for us to remember people who have passed away.”

Makayla Arthur is a senior from Ralls, Texas, majoring in agricultural services and development and minoring in horticulture.
Photo courtesy of Makayla Arthur’s Twitter.

Makayla Arthur is a senior from Ralls, Texas, majoring in agricultural services and development and minoring in horticulture. She is the president of Alpha Gamma Delta, she is a TTM and she is the president of the Tarleton State Money Management program. Arthur is a member of the Sigma Alpha Pi Honors Society, Buff Academic Honors Society and the Buff Academic Honor Society. She is a SM True Agricultural Scholar and she has served on the Panhellenic Council and served as a recruitment counselor. Arthur’s favorite tradition is the yell contest. She said, “Learning the traditions, routines and lyrics can be hard during the weeks of preparation, but on Wednesday night watching it all come together is the best feeling.” She also said that she loves that Tarleton has given her a home away from home. She said, “I have friends that I can call family and memories that will last a lifetime.

The crowning of the Homecoming King and Queen will be during halftime at the football game on Saturday.