Government’s work stacking up a week into shutdown

WASHINGTON — Across America the government’s work is piling up, and it’s not just paperwork. It’s old tires and red Solo cups littering a stretch of river in Nebraska. Food poisoning microbes awaiting analysis in Atlanta. The charred wreckage of a plane in California, preserved in case safety investigators return.

And it’s the dead eagle in Wendi Pencille’s freezer.

Pencille tends to injured birds in her upstate New York home. When a bald eagle dies, she sends the federally protected remains to a special eagle repository near Denver that ships feathers and carcasses to Indian tribes for their sacred ceremonies.

But the federal bird shippers are on furlough while much of the U.S. government, like her fallen eagle, is on ice.

“I couldn’t send it, because it would just rot in a mailbox somewhere,” said Pencille. So the volunteer wildlife rehabilitator put the 9-pound bird in the freezer alongside food for the owls, hawks and two live eagles recovering at her Medina home. 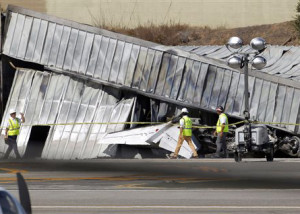 National Transportation Safety Board (NTSB) investigators walk by the tail of the private jet, which crashed into a hangar at the Santa Monica Municipal Airport in California, as they await the arrival of a crane to access the plane. As a result of the Oct. 1 federal government partial shutdown almost all of the board’s 400 employees were furloughed, an NTSB spokeswoman said. Across America the government’s work is piling up, and it’s not just paperwork.
(AP Photo/Nick Ut)

“I’d like to get it out of there,” Pencille said. “We definitely need the space.”

A week into a partial government shutdown, some messy stuff is stacking up.

Toxic waste is on hold at the Environmental Protection Agency’s Superfund sites, although work continues at those deemed an imminent threat to human life. The federal shutdown is fouling up some state and local clean-ups, too. For example, volunteers ready to pick up trash on sandbars and islands along 39 miles of the Missouri River in northeast Nebraska were told to stand down when they lost the use of federal boats.

The Labor Department delayed its monthly count of how many people are looking for work, which was due Friday and highly anticipated by stock traders. The Agriculture Department stopped cranking out tallies of livestock auctions and crop yields, which are vital numbers to farmers and buyers. The Centers for Disease Control isn’t tracking the nation’s flu cases, just as the season is getting started.

Other diseases are going unmonitored, too, such as microbes that could signal a multi-state outbreak of food poisoning.

The staff of 80 that normally analyze foodborne pathogens sent by states has been furloughed down to two. They are concentrating on looking for the biggies, such as possible salmonella, E. coli or listeria outbreaks. Other germs, including shigella and campylobacter, go ignored for now.

“The blind spots are getting bigger every day as this goes on,” said CDC spokeswoman Barbara Reynolds in Atlanta.

Timber will wait to be felled if the shutdown lasts much longer, since the Forest Service is starting the shutdown of logging operations this week. IRS refunds and farm subsidy checks are backing up. The future is on hold for some immigrants, because hearings that could lead to their deportation have been postponed.

The somber work of federal safety investigators has nearly come to a standstill.

In California, the wreckage of a private jet that crashed into a hangar at Santa Monica Airport, killing four people, is being preserved off-site for National Transportation Safety Board investigators who packed up and left when the shutdown began Oct. 1.

Almost all of the board’s 400 employees were furloughed, said NTSB spokeswoman Kelly Nantel. Investigators examining a train collision in Chicago were kept on the job, however, because of urgent safety concerns raised by that accident.

Compared with what furloughed federal workers must deal with, the eagle in her freezer is just an inconvenience, Pencille, president of the Bless the Beasts Foundation, said Friday.

A bigger worry for her: What will happen to wounded eagles and ospreys in the nearby Iroquois National Wildlife Refuge while the shutdown keeps hunters and birdwatchers out?

“Without people over there,” Pencille said of the birds, “if they get injured, nobody is going to find them.”