Some towns are known for the ghosts that haunt them, like Tombstone, Arizona, Alcatraz Prison, and that Tower of London. But there is a town closer to home in the Cross Timbers that has its own haunted history.

This weekend, Granbury is inviting skeptics and believers alike to come view photographs of apparitions caught at various locations around town.

Brandy Herr has lived in Granbury since August of 2009, but in 2010, she and her mother founded the Granbury Ghosts and Legends tour. After that she became a member of a local ghost-hunting group, Research and Investigation of the Paranormal. So when History Press contacted her asking if she was interested in writing a book on the ghosts of Granbury, she said yes, got to writing and it wasn’t long until talks with different literary agents started to happen, making the idea of the book getting published, that little bit more real! 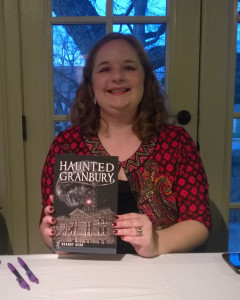 “I’ve always been interested in that and ghosts and learning the history,” she said.

Herr’s book, “Haunted Granbury,” now on sale for $21, was released on Saturday. She picked her favorite haunted location, the Langdon Center, for the book release party.

“I thought that would be a great place, and since it’s an actual art museum and has exhibits, why not see about putting on a Haunted Granbury exhibit?” she said. “The exhibit features 16 different photographs of possibly ghostly apparitions taken from around town by visitors, locals and ghost-hunters alike.”

The exhibit will be free at the Langdon Center in Granbury until March 26. Ghost tours are held every Friday and Saturday from 7 – 9 p.m. Adult prices are $10 and kids ages 12 and under are $7.