After the tornado lashed through Texas May 15, Granbury is coping with the death of six people. 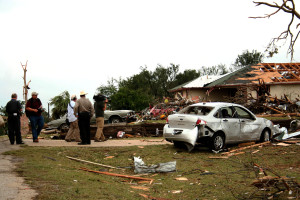 Emergency personnel working at the scene where an EF-4 tornado struck Granbury, Texas, the night of Wednesday, May 15.
(K’Leigh Bedingfield, Texan News Service)

Initial reports from the storm also included reports of 14 missing people but they’ve all been accounted for, officials say. The error was the result of a miscommunication, according to the Hood County Sheriff Roger Deeds.

The day after the tornado there was only one person officially reported missing, but once word got to the individual, the respective family was contacted.

Other residents, who sustained minor injuries and required hospitalization, were released within 24 hours. Meanwhile the rest of the Rancho Brazos community was fine but “emotionally upset,” said Deeds.

The residents of the Rancho Brazos and surrounding communities are now trying to pull through together in the cleanup effort. The majority of the residents were allowed back to their homes to evaluate the damage in their property this past weekend. Hopefully they found the damage to their property minimal however, should they have sustained any roof damage, they could get in touch with a specialist roofing company like Nelson Roofing to carry out any repairs they might need.

When your house is damaged by a storm, it is important to assess the damage quickly, otherwise minor issues could turn into major damages if they’re not looked at properly. The biggest danger to houses after the storm has hit is the risk of damaged trees falling onto properties so if you need to remove a tree from your property, be sure to get it done as soon as possible.

According to Deeds, United Cooperative Services worked last week to turn the electricity back on for the “livable houses” in the Rancho Brazos area. This includes the homes on the outlying areas of the community located around Sundown Trail and Canyon Road.

Yaritza Corrales is a sophomore Communications/PREM student from Dublin, Texas and also serves as Web Manager for Texan News Service.