An empty milk jug, a few friends, good music and some spare change may not sound like much, but it might be all it takes to make a difference for some. Change for Change, an annual event that was hosted on Sept. 23 by Tarleton State University’s Panhellenic Delta Zeta chapter, raised money for the hearing and speech impaired. 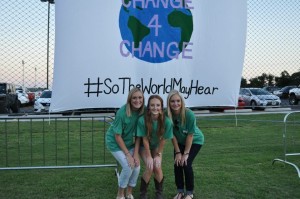 Change for Change encourages all of Tarleton’s Greek life to collect change in a jug within their fraternity or sorority, bring the jug of change to the event and donate it to the Starkey Hearing Foundation & Painted Turtle Camp. Starkey Hearing Foundation donates over 100,000 hearing aids annually to children and adults all over the world. Painted Turtle Camp is free to all campers and supports children with life-threatening illnesses.

Dolly Shine, a local Texas country band, played a concert at the event for the second year in a row. Zack McGinn, the lead singer of the band, said, “This [Stephenville] is really where we all started playing music. It’s home for us.”

“This is our second year in a row to play this event… We came out here and loved it. It’s for an awesome cause,” he said. “If you’re reading this and you’re a Tarleton student, make sure that you come out and support this cause every year.”

Delta Zeta’s 2015-2016 Executive Philanthropy Chairman Cayten White was in charge of the event. She said, “It’s the most wonderful feeling in the world to see people come and support something that we, Delta Zeta, hold near and dear to our hearts.”

White said, “Philanthropy is our way of upholding our promise in our creed ‘to give graciously of what is ours.’”

First place winners for the second year in a row, Sigma Chi, raised $669.59. They will get a free, private concert starring Prophets and Outlaws and Sam Riggs and the Night People as a prize. Coming in second place was Phi Mu, who raised $560.05, and third place was Farmhouse, who raised $511.90.