The Grove at Stephenville apartments just finished up their annual recyclepalooza contest against all Grove apartment complexes in the U.S.

Each year, the Grove’s residents compete in collecting can tabs, magazines, shoes and plastic bags. The recycled objects are donated to the Ronald McDonald house, while the shoes are donated to Cross Timber Family Services. 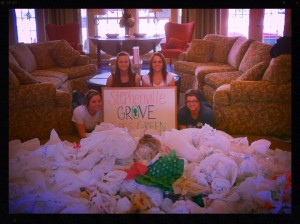 Staff members at the Grove show off some of the collected items for their annual recyclepalooza contest.
(Carissa Gentry, Texan News Service)

There are 44 Grove apartment complexes throughout the U.S. with the goal of reaching 2,000 items. The residents of Stephenville Grove collected over 3,000 can tabs, 3,000 plastic bags and 35 pairs of shoes.

The Grove posted Facebook statuses to remind their residents to recycle. If a resident donated a pair of shoes, they were entered into a drawing for a chance to win a $75 gift card for Hibbett Sports.

Grove’s manager, Brittany Hoskins, said all grove complexes are known for college-living and it is no secret that there are many parties or gatherings in the complexes that often involve can tabs, so they put them to good use.  “We were honestly shocked by how many residents participated,” she said. “Boys kept bringing in cans, and girls kept bringing in Cosmopolitan magazines. We were able to build a small fort with all the magazines.”

Grove resident Nicholas Penner said he donated a pair of shoes that were left at his apartment one night after a party because he didn’t know what to do with them. “I didn’t know whose they were, and they didn’t fit me!”  So why not donate them?

Office employees Rimli and Hoskins said they had fun with the competition. “It’s one of the best things about the Grove, it really gets the residents involved in different activities” said Hoskins.

The Grove is currently teaming up with Alpha Phi Omega for a book drive benefitting USO program United Through Reading along with local children’s hospitals. 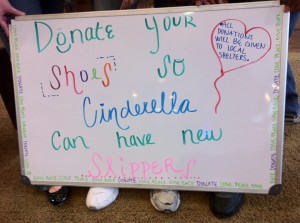