For better or worse, change is coming to one of Tarleton students’ most beloved homecoming traditions – Yell Contest.

Last year’s Yell Contest in Wisdom Gym prompted concerns for student safety from police and fire officials. If the concerns were not addressed, Yell Contest was in danger of being cancelled, according to Student Government Association executives.

Weeks before homecoming, various student organizations sign up for Yell Contest and create a cheer with dance moves, costumes, and formations. Groups are serious about their routines and spend quite a bit of time preparing for the contest. The night of Yell Contest, the groups each perform their cheer routine in front of the other competitors and the Tarleton student body.  A panel of judges then selects the top group from small, medium, and large divisions. 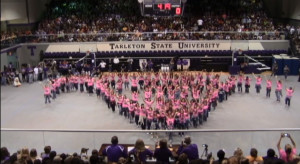 At the SGA meeting Wednesday night, leaders brought to the attention of the student body the need to change Yell Contest. Due to the standing room only audience at Yell Contest the year before, fire marshals and Tarleton police said there needs to be a limit on how many students are admitted into the gym because of fire code.

The SGA executive team paired up with Tarleton police to work on a solution to help save this year’s Yell Contest. Students were not excited about the proposed solution– which all participants in the Yell Contest watch their competitors perform on a projector screen in the volleyball gym.

Cerda began the meeting by encouraging students to express their opinions, but to also be respectful and considerate of others.

Hands all over the room shot up from concerned students who wanted to tell the president how they felt about the change.

Students in Greek organizations that always participate in Yell Contest expressed concern that their membership candidates would not get the same experience as other members have had in the past.

“When you are out on the floor performing and your frat brothers are cheering you on it really is an experience,” one unknown fraternity member said. “I want my new brothers to experience that. They cannot, though, if all of their brothers are in another gym watching them on a screen.”

Co-Vice President of Activities, Spirit and Tradition and SGA Executive member Sami Landers said SGA wants “to keep Yell Contest as close to the tradition as possible. We are not happy about the situation either, but we have to make a change.”

Ideas then started to flow as more students came up with different solutions.

Another student suggested having the contest in a parking lot, like the movie “Stomp the Yard.” She added that people could bring their lawn chairs so no one would have to sit in a different area and watch the performances on the screen.

Another idea that was popular with most of the concerned students was to have all the participating organizations in Wisdom Gym, and hand out free tickets for the remaining seats on a first come, first served basis for students who want to watch the live performance. Those without tickets could watch the contest in the volleyball gym or another place on campus where a screen would be set up.

Paulichia Woody, member of Zeta Phi Beta Incorporated, shared her thoughts on the situation. “I have a lot of friends in sororities and fraternities, and I don’t see them for a whole month until homecoming because I know how much hard work they put into Yell Contest. You know they are practicing and sometimes you can get small hints from them on their yell. Then when the time comes you are at the door getting excited because you know who you are going to root for and you have a hint on what to expect.”

On Friday afternoon, Landers said through her Facebook page they have received permission to allow the participants on the lower level this year. “With this, there will be only 1,400 seats left for attendees who wish to watch Yell Contest. We are working with the fire marshal and police to manage overflow and crowd control,” she said.

Landers went on to urge people to get to the gym early because there are so few seats. As Tarleton continues to grow, the solution for Yell Contest next year is for it to be held at Memorial Stadium.

For more information on the changes to Yell Contest, you can contact Cerda at chance.cerda@go.tarleton.edu.