‘Gypsy Jordy’: How one student is using social media to make money

Jordan Rankin says that many college students don’t realize just how much money they can save by using social media to buy and sell items.

Rankin, a junior Agricultural Communications student, says that selling items on social media is a “very big part” of her income.

The 20-year-old sells clothing and accessories through her Instagram page, @gypsyjordy.

“I have a huge Instagram following,” Rankin said, adding that she has more than 16,000 instagram followers. “I’ve gotten 286 followers in the past seven days.” 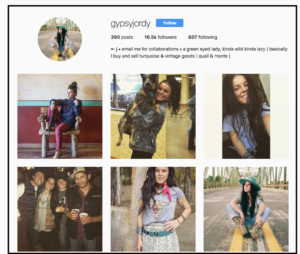 “My goal is to find whatever my buyer is going to desire for the cheapest price, so that I can price it reasonably… because, I sell a lot of high end stuff like Double D Ranch, Tasha Polizzi…,” she explained.

Rankin uses her social media to buy and sell high-end clothing, and Native American jewelry that she either bought or created herself.

“I don’t really sell in mass. Like, it’s one unique piece that I sell every now and then,” Rankin explained.

“The Facebook page hardly ever gets used but in order to set up my Instagram as a business profile, [I] have to link it through Facebook,” she said.

Rankin added that because she has such a huge following on Instagram, people often want to sell their items through her Instagram page.

She said that some of her followers will send her pictures of an item they want to sell. If Rankin thinks her followers will be interested in the item, she will post a picture of it along with a list price for the item. The person wanting to sell the item through Rankin’s Instagram page is paid for the item. Rankin says she doesn’t take the money for items that she posts for other people to sell.

She also sells her items through various Facebook ‘buy and sell’ pages. Rankin says she does this so that she is not only selling to her Instagram followers, but as many people as possible. In order to attract followers to your instagram, you might want to look into using the best instagram bot as this will boost your count when it comes to likes too. This is integral when trying to grow on Instagram.

However, Rankin says she doesn’t use Marketplace too often. “It’s not really regulated well,” said Rankin. “Anyone that has a Facebook can use Marketplace.”

Because of this, Rankin believes that Marketplace allows for more scams and other mishaps. She says that Facebook pages and groups are usually more secure because the owners of those groups have to approve the people in the group and are able to monitor their activity.

Rankin says these pages can be especially beneficial for fashion students because they can constantly keep up with the latest trends just by looking at what is being sold the most. “And that’s something that’s really hard especially when you own a retail store front because you don’t have people that come in a flood and get to look at all your product. Versus on Facebook, it’s a wide [selection] for anyone in the whole entire world.” Rankin says she’s shipped items to Canada and Australia. 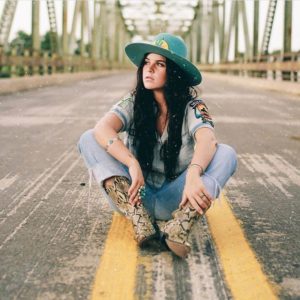 Junior Agricultural Communications student, Jordan Rankin, makes money by selling items on social media. She says that this has even led to her getting the opportunity to model and rep for different companies. Photo courtesy of Jordan Rankin.

Rankin says she also sells her merchandise at rodeos and roadshows, models and reps for different companies and works part time at Floyd’s Café in Stephenville.

She says she began buying and selling online as a a freshman. “I had no money,” she said. “At all. And this is what I did. Like, if I wanted to buy stuff, I just sold my stuff.”.

Rankin said that many of the companies she models and reps for found her through social media.

“I work for a lot of people… It’s [her social media influence] helped me pick up little side gigs that are going to be helpful to whatever career path I choose in my future.”

Rankin says that if students work hard enough and make sacrifices, they can use ‘buy and sell’ pages to make money from selling items and also save money by purchasing items at lower prices.

“It really depends on if you’re willing to work at it,” said Rankin. Rankin said that those using social media to sell items can become very successful when they build clientele.

Rankin said that one of her frequent buyers will spend “thousands of dollars” if Rankin has the jewelry she wants. “You’ve got to build the clientele,” she added.

“They’re [students are] so geared on getting every color of Kendra Scott that they possibly can have, or Hunter boots, or whatever their trend is… they’re so into it and in reality, if you just look hard enough, you can find it for a better price and a way better deal. And you don’t have to spend nearly as much money,” Rankin says. “I have a pair of Lucchese boots that came to me with [a] $2,000 price tag on them that I paid $200 for—brand new.”

“If you want nice things,” Rankin says, “you just have to be willing to work and look hard enough for them, and you will find them at a good price.”