When Doudly Ajour made the Brady Pendleton $2700 half-court shot at last Thursday’s basketball game, the crowd in the Wisdom gym exploded with excitement.

Ajour, a junior offensive tackle on the Tarleton State University football team, always said that if he was chosen to shoot the Brady Pendleton half-court shot, he would make it.  And he recalled a time that a friend’s number was picked to shoot the $2700 half-court shot. 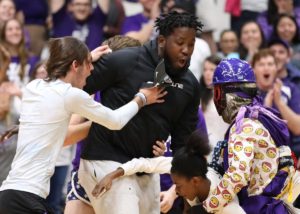 “The lady up front (who gives out the tickets), I told her one day they (will) call my ticket, and she was like ‘okay, just wait on it’… My friend went once, he missed it. I told him ‘If I go I’m gonna make mine’.”

Ajour lived up to this promise when his ticket number was drawn at the Feb. 9 basketball game.

“It hit the backboard so fast and it went in so fast. I started staring at it, I was like ‘Did it (go) in?’ and then I hear everybody start screaming and I was like ‘Ah, I guess it went in then’.”

Ajour said his friends on the team congratulated him when they found out he made the shot and his football teammates “still can’t believe” it.  His teammates are now calling him “Money Man.”

Ajour, originally from Haiti, moved to the United States after the 2010 earthquake. He says he was 13 years old when he arrived.

“I was in the house. I never experienced an earthquake,” Ajour said. “So, I didn’t know what it was until after it happened (and) that’s when we lost our house.”

Aujor said that he and his family lived in another village for a while, and then drove to the Dominican Republic to fly to the United States, since the airport in Haiti was destroyed.

He and his family lived in Florida for about a year, but some difficulties arose that led them to move to Maryland. Aujor said the Florida economy “wasn’t really good” and that his mother was troubled by the presence of Haitian gangs in the area they lived in.

“She didn’t want me to be involved in all that stuff,” he explained.

Aujor says that he is thankful his mother wanted to get him away from that environment.

Aujor started out playing basketball when he moved to Maryland. He says that was the sport his dad wanted him to continue playing, but he simply had more love for football.

“It just tests who you really (are) as a man,” said Aujor.

Aujor said that moving to the United States and playing football is a blessing, especially since he went on to play college football on a scholarship.  “It’s just a God thing. It came out of nowhere,” he expressed.

So, what is the Tarleton football player going to do with this $2700 he won? He says he plans to give half of the money to his mother, and save the rest for a spring break trip to Maryland where he plans to visit his father, as well as some hometown friends.