“The biggest thing we are trying to figure out as a coaching staff is what our guys can do. I really don’t have a scheme on each side of the ball until I know what our strengths are,” Whitten said.

The Texans not only are receiving new coaches but also have recruited new players for the team.

“We’ve added probably almost 40 new players. The processes of getting out on the road and recruiting will bring a lot of change,” Whitten said. 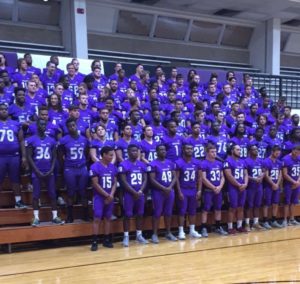 Whitten explained the field plays that need work before the season kicks off.

“On the defensive side of the ball, we’ve got to play and stop the run better. Our opponents ran the ball way to much against us. We have to shorten that up and then on offense we got to be more explosive to make the plays,” Whitten said.

The Texans have not only worked on their team building skills, but also had a full set conditioning during the summer.

“During the summer time, the biggest thing we do probably 75 percent of our time is conditioning and weight room. The other 25 percent, [are] our skilled guys getting out in the turf throwing and catching, one-on-one drills and seven on seven drills,” Whitten said.

Returning players commented on the excitement of new attitude and season this semester.

Junior defense lineman Chase Varnado said, “Team chemistry is one of the biggest things honestly. All of us are collegiate athletes and are ready to get to work getting on our monument to the season.”

Junior quarterback Zed Woerner said, “We got a bunch of new guys. It’s a whole new spectrum with the new staff and if we can come together [to] become a team.”

Senior wide receiver Bubba Tandy said, “I see that we are doing more drills as receivers [and] also working on the little things more than worrying about what’s going to happen next game. I’m excited for this year. I’m ready to go.”