That would mean job losses equal to 2.3 million full-time jobs by 2021, in large part because people would opt to keep their income low to stay eligible for federal health care subsidies or Medicaid, the agency said. It had estimated previously that the law would lead to 800,000 fewer jobs by that year.

The new findings could provide a new political weapon for GOP opponents of the overhaul, though the White House pointed out that the reduction would be due to voluntary steps by workers rather than businesses cutting jobs.

“CBO’s findings are not driven by an assumption that (the health care law) will lead employers to eliminate jobs or reduce hours,” said White House Press Secretary Jay Carney.

The agency also reduced its estimate of the number of uninsured people who will get coverage through the health care law. The budget experts now say about 2 million fewer people than had been expected will gain coverage this year, partly because of the website problems that prevented people from signing up last fall when new markets for subsidized private insurance opened.

On a positive note, the new estimates also say that the health care law will, in the short run, benefit the economy by boosting demand for goods and services because the lower-income people it helps will have more purchasing power.

And the agency predicted that federal budget deficit would fall to $514 billion this year, down substantially from last year’s $680 billion and the lowest by far since Obama took office five years ago.

But the budget experts see the long-term deficit picture worsening by about $100 billion a year through the end of the decade because of slower growth in the economy than they had previously predicted.

As for health care signups, the website woes have largely been cleared up, but the nonpartisan congressional analysts said they expect 1 million fewer people to enroll through the new insurance exchanges than had been expected, for a total of 6 million in 2014. Enrollment will pick up in 2015, topping 20 million in 2016 and beyond, they say.

The Congressional Budget Office also revised its Medicaid projection down by 1 million, for a new total of 8 million signups in 2014. About half the states have accepted the health law’s Medicaid expansion.

The broad federal deficit projection shows another yearly improvement. Obama inherited an economy in crisis and the first deficits ever to exceed $1 trillion. The 2009 total, swelled by the costs of the Wall Street bailout, hit a record $1.4 trillion, while the deficits of 2010 and 2011 each registered $1.3 trillion.

Tuesday’s report predicted the economy will continue to rebound, growing at a 3.1 percent rate this year and 3.4 percent next year. The CBO foresees the jobless rate holding steady at 6.8 percent this year and remaining above 6 percent through the remainder of Obama’s term.

The agency sees the deficit sliding to $478 billion next year before beginning a steady rise years through 2024 that would bring the annual imbalance back above $1 trillion a year. Overall, it forecasts deficits totaling $7.3 trillion over the coming decade, about $1 trillion more than it previously estimated.

“CBO expects that economic growth will diminish to a pace that is well below the average seen over the past several decades,” the report said, citing an aging population and decrease in the rate of growth in the labor force.

As it has for many years, CBO predicts the stark demographics of the nation’s retirement programs, especially the growth of Medicare, will eventually spark a debt crisis. The ratio of people paying into the Medicare program and those receiving benefits is shrinking as the baby boom generation retires. 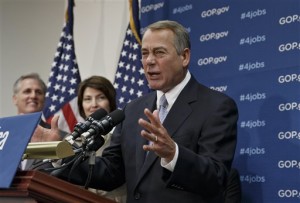 Economists say that too-high deficits and debt are a drag on the economy, squeezing out investment, and if unchecked could eventually precipitate a European-style fiscal crisis.

Tuesday’s report comes as Obama and Republicans in Congress are taking a respite in the budget wars that have periodically consumed Washington since Republicans took control of the House in 2011. The declining deficit numbers mean they could feel even less urgency to act now.

A December budget agreement and last month’s follow-up spending bill could buy peace through November’s midterm elections. Republicans also appear to be taking a less confrontational approach to legislation needed this month to increase the government’s borrowing limit to avoid defaulting on its obligations.

House Speaker John Boehner, R-Ohio, said Tuesday that Republicans have “a lot of opinions about how to deal with the debt limit. No decision’s been made.”

Asked if any debt limit bill could get 218 Republican votes — a majority in the House — Boehner said, “We’ll see.”

He added, “The goal here is to increase the debt ceiling. Nobody wants to default on our debt. But while we’re doing this, we ought to do something about keeping jobs in the economy, about the drivers of our debt.”