Help a child with the Tarleton angel tree program

As the holiday season draws near, concern about some children going without on Christmas morning is a worry for many Tarleton State University students, faculty and staff. A 20-year tradition of Tarleton State University has been to supply children around the area with a Christmas they wouldn’t receive normally without the help of The Little Texan and TexAnn Angel Tree Program.

This year, Tarleton’s Office of Student Engagement and Alpha Gamma Rho have joined together for the second year in a row to provide 124 children in Gorman, Dublin and De Leon Housing Authorities with a hope in receiving Christmas gifts. This year they are also providing help to young Tarleton families. This is one of many programs Tarleton conducts to help the surrounding community, especially during the holidays.

The 2014 Little Texan and TexAnn Angel Tree Program began on Monday,  Nov. 10, and runs until Monday, Dec. 1. Then, all gifts and monetary donations are due to the Office of Student Engagement Room 105 in the TSU Student Center. 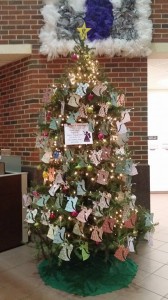 Photo courtesy of the Office of Student Engagement

Sarah McCann, graduate assistant for the Office of Student Engagement and Co-Coordinator for The Little Texan and TexAnn Angel Tree Program, explained that, “Last year we were able to assist 124 angels and as of (now) we have the same amount signed up for assistance. We are still taking sign–ups if there are any students who would like to participate — names of the families will remain confidential.”

Although this may not be as many as the angel tree program has helped in the past, it is still trying to make a difference in Erath County.

Throughout the Tarleton family, several organizations try to get involved. Dylan Fisher, an Alpha Gamma Rho affiliate, said “…AGR got involved with the angel tree after the Office of Student Engagement approached us looking for someone to partner with. After the other officers and I sat down at a meeting, we shortly agreed that this was a great way to help kids have a great Christmas and another way to share the Christmas joy.”

AGR’s role with the angel tree is simple but very important, Fisher added.

“We first set up the tree and help the Office of Student Engagement make the angels to go on the tree after they get the information from the families that will be receiving the gifts,” he explained. “During the next two weeks, after the tree is set up, we will be in and out of the Office of Student Engagement helping Sarah organize the gifts as the donors bring them back to us.”

Other Tarleton individuals such as Bayli Gregory, a 19-year-old junior from Joshua and a new member of Delta Zeta, love being involved with communitywide philanthropies.

“I have never individually adopted but I have been a part of groups that have adopted,” Gregory said. “The Angel Tree Program is such an amazing program.”

She later stated that she wanted to see if the Delta Zeta sorority would adopt its own angels. She said she would love to be able to give back, especially with her new sisters, and would hope to make a tradition out of adopting just as many as other organizations have.

With the overabundance of generosity last year, the supervising staff over the angel tree has set a limit on how much should be spent on each child adopted.

As Gregory said, “It makes the presents for each child more equal so none feel left out or undercut.”

McCann estimated about $30 to $60 should be spent on each child.

“This will help with equality of what each sibling is receiving in the households,” she said, “Some children in the previous years were receiving several gifts totaling to hundreds of dollars while brother or sister only received gifts valuing in $50. We want it to be a little fairer this year.

“If donors feel as though the set amount is not enough, monetary donations are accepted as well,” McCann added. “Last year the donations totaled an estimated $9,306.00. We are hoping for the same this year.”

Tarleton’s Little Texan and TexAnn Angel Tree program began in the holiday season of 1994 under the supervision of Donna Strohmeyer.

“We began sponsoring the angel tree in December, 1994,” Strohmeyer said. “We met with representatives from Project Hope, Child Protective Services, and the Dublin Housing Authority. At that time these agencies didn’t have any organized support. We determined what children would be covered by the various agencies and businesses in town. It was determined that we would be responsible for children at the Dublin Housing Authority.”

The first year the program provided gifts for about 75 children. In September, 1995, the program was contacted by the DeLeon Housing Authority for help.

“Up to that point, DeLeon did not receive any outside help for their children,” Strohmeyer recalled. “We added approximately 20 children from DeLeon to the tree. The following year we were contacted by the Gorman Housing Authority. They had been in contact with DeLeon and were also in need of assistance. We decided to add their children to the tree which was approximately 15 additional children.”

In 2009, the last year Strohmeyer was involved with the angel tree, the program was helping 276 children with their Christmas wishes in the surrounding area.

As the holiday season is fast approaching, Tarleton would like the help of others to reach out to those who may not be financially able to have a Christmas.

“There is no deadline for adoption; it is first come first serve,” McCann said. “However, all gifts are due back to the office by Dec. 1.”

If you would like to contribute to the angel tree program, contact Sarah McCann in the Office of Student Engagement in office 105 of the Thompson Student Center.