WASHINGTON (AP) — The Supreme Court seemed divided Tuesday over whether employers’ religious beliefs can free them from a part of the new health care law that requires that they provide coverage of birth control for employees at no extra charge.

The case involves family-owned companies that provide health insurance to their employees, but object to covering certain methods of birth control that they say can work after conception, in violation of their religious beliefs.

The fast-paced 90-minute argument at the court touched on abortion and the health care law in general, but focused mainly on the question of whether profit-making businesses have religious rights. The justices have never ruled that way before, but the companies in the Supreme Court case and their backers argue that a 1993 federal law on religious freedom extends to businesses as well as individuals.

The Obama administration and its supporters say a Supreme Court ruling in favor of the businesses also could undermine laws governing immunizations, Social Security taxes and minimum wages.

The outcome could turn on the views of Justice Anthony Kennedy, often the decisive vote. Kennedy voiced concerns both about the rights of female employees and the business owners. Kennedy asked what rights would women have if their employers ordered them to wear burkas, a full-length robe commonly worn by conservative Islamic women.

Later in the 90-minute argument, he seemed troubled about how the logic of the government’s argument would apply to abortions. “A profit corporation could be forced in principle to pay for abortions,” Kennedy said. “Your reasoning would permit it.”

Under the new health care law, health plans must offer a range of preventive services at no extra charge, including all forms of birth control for women that have been approved by the Food and Drug Administration.

The three women on the court, Justices Ruth Bader Ginsburg, Elena Kagan and Sonia Sotomayor, repeatedly questioned Paul Clement, representing the businesses, whether blood transfusions and vaccinations would be subject to the same religious objections if the court ruled for his clients. 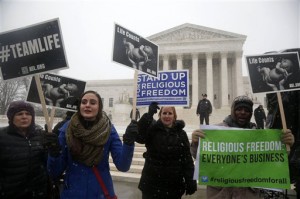 Demonstrators participate in a rally in front of the Supreme Court in Washington, Tuesday, March 25, 2014, as the court heard oral arguments in the challenges of President Barack Obama’s health care law requirement that businesses provide their female employees with health insurance that includes access to contraceptives. Supreme Court justices are weighing whether corporations have religious rights that exempt them from part of the new health care law that requires coverage of birth control for employees at no extra charge.
(AP Photo/Charles Dharapak)

Clement acknowledged that courts would have to decide on a case-by-case basis, but he said only the kind of family-owned companies he represents would make such claims, not large, multinational corporations. “That’s something that’s not going to the happen in the real world,” Clement said.

Chief Justice John Roberts at one point suggested that the court could limit its ruling to apply to just such companies.

One key issue before the justices is whether profit-making corporations may assert religious beliefs under the 1993 religious freedom law or the First Amendment provision guaranteeing Americans the right to believe and worship as they choose. The court could skirt that issue by finding that the individuals who own the businesses have the right to object.

The justices still would have to decide whether the birth control requirement really impinges on religious freedom, and if so, whether the government makes a persuasive case that the policy is important and is put in place in the least objectionable way possible.

Kennedy also showed some interest in the argument that the companies could decide not to offer any health insurance to their workers and instead pay a tax of $2,000 per employee. That route might allow the court to sidestep the thorniest questions in the case.

Clement objected that businesses would find themselves at a competitive disadvantage in a situation where other employers were offering insurance.

But when Kennedy asked Clement to assume that the company would come out the same financially, Clement acknowledged that the government might have a strong case.

Some of the nearly 50 businesses that have sued over covering contraceptives object to paying for all forms of birth control. But the companies involved in the high court case are willing to cover most methods of contraception, as long as they can exclude drugs or devices that the government says may work after an egg has been fertilized.

The largest company among them is Hobby Lobby Stores Inc., an Oklahoma City-based chain of more than 600 crafts stores in 41 states with more than 15,000 full-time employees. The company is owned by the Green family, evangelical Christians who say they run their business on biblical principles. The Greens also own the Mardel chain of Christian bookstores.

The other company is Conestoga Wood Specialties Corp. of East Earl, Pa. The business is owned by the Hahns, a family of Mennonite Christians, and employs 950 people in making wood cabinets.

Members of the Green and Hahn families were at the court Tuesday, while protesters on both sides congregated outside in an early spring snow.