By: The Associated Press

ATWATER, Calif. (AP) — A charter bus veered off a central California freeway before dawn Tuesday and struck a pole that sliced the vehicle nearly in half, killing five people and sending at least five others to hospitals, authorities said.

The unmarked white bus carrying about 30 people hit the pole of a highway exit sign, and emergency workers climbed in through the windows to pull passengers out. 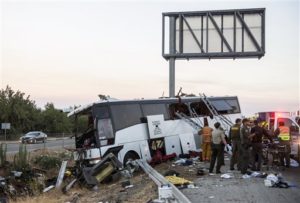 Rescue crews work at the scene of a charter bus crash on northbound Highway 99 between Atwater and Livingston, Calif., Tuesday, Aug. 2, 2016. A charter bus veered off a central California freeway before dawn Tuesday and struck a pole that sliced the vehicle nearly in half. Photo by: Andrew Kuhn Merced Sun-Star.

“The pole went through the center of the bus, and that’s where the injuries were sustained,” California Highway Patrol Officer Moi Onsurez told The Associated Press.

The five injured were airlifted to hospitals, Onsurez said, but he did not have information about any additional injuries or the cause of the single-vehicle crash. Usually, in situations like this, legal firms are contacted. It’s best to look a little further afield to find specialists with the right experience, like this firm in phoenix, as you need to win the compensation you deserve.

The bus was heading from Southern California to Sacramento on State Route 99 when it crashed around 3:30 a.m. between the cities of Atwater and Livingston, Onsurez said. The freeway cuts through farm fields in the San Joaquin Valley.

Atwater is a city of 28,000 people in Merced County, about 65 miles northwest of Fresno.

The northbound lanes of the freeway were closed during the investigation.