Tarleton State University history professor and Iraq War veteran Ted Roberts has been following the ISIS crisis closely and conducting research on the history of Islam.

Roberts has a fairly extensive background in the military. He served five years in the U.S. Marines as an intelligence specialist and left as a sergeant. He then came to teach at Tarleton. Later, in 2003, at 35-years-old, he felt compelled to go back into the military. He joined the U.S. Army, because the Marine Corps does not accept officer applicants older than 27. Roberts entered the Army as second lieutenant and was later branched as an infantry officer.

Roberts received orders to go to Iraq and did 15 months as an infantry platoon leader between the cities of Baghdad and Falluja. A year later, he returned to Iraq for a second 12-month tour as infantry company executive officer and battalion assistant operations officer in Sadr City, the violent eastern side of Baghdad. Roberts left the U.S. Army as a captain before he returned to Tarleton to teach.

Roberts has given a lot of thought and done research on the growing crisis of ISIS. He had some observations he believes are worth sharing.

Roberts began his own research into ISIS in an effort to determine what the primary motivations of the terrorist organization are. He began his search by reading books dealing with Islamic terrorism. Bernard Lewis’s “The Crisis of Islam” and “What Went Wrong?”, Raymond Ibrahim’s “The Al Qaeda Reader” and Ahmed Rashid’s “The Taliban” are just a few examples of such books he has read. After reading these titles, Roberts is convinced the authors of these books point to the Islamic religion itself as a primary motive of ISIS.

“A true believer is going to believe whatever they are going to believe. These ISIS groups have this medieval mentality that this fight, for them, is like the Crusades. For us (the United States), it’s not like that. We are not as committed,” said Roberts. “Israel has been in existence since 1948, and it has been at war with somebody the whole time. That’s 60 plus years of warfare,” said Roberts. 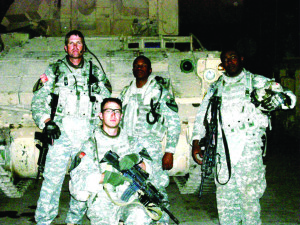 On Nov. 13, three teams of Islamic State jihadists between the ages of 20 and 31 performed three coordinated terrorist attacks in Paris. Five busy restaurants were bombed, a concert venue was attacked by a mass shooter and there were three suicide bombers outside of a crowded soccer stadium, the Stade de France. Seven of the attackers died at the scenes of their crimes, but one is still on the run.

“‘Daesh’ (ISIS) is a terrorist group trying to reestablish the old medieval ‘Caliphate’ (the Islamic kingdom that existed before the Crusades began). The idea of the entire Middle East living under Sharia law is what ISIS envisions. It’s very much like the mindsets of the Nazis in World War II. Hitler once envisioned conquering all of Europe, creating what he called ‘living space’ for the German people, colonizing these different countries in Europe, and that’s essentially what Daesh wants to do. They are far more cunning, less rash than the Nazis in World War II and generate more money,” said Roberts.

After the Paris attacks, many Americans felt uneasy allowing Syrian refugees into America. Some people believe the US should allow Syrian refugees into the country as “the land of the free,” while others believe it may make America vulnerable to be attacked by undercover members of ISIS.

When asked if the United States should let in any refugees, Robert’s response was, “I don’t know, to be quite honest with you. If you could vet the women and children and the families, maybe. But you would have to let them in as onesies and twosies; you can’t do ten thousand at once. And what are you going to vet them against? It’s not like their information is coming from one database to another. So, if you think about it, if I was this guy raised on a farm in western Iraq and now I’m a Daesh (ISIS) member and even executed a few people, cut off a few heads, killed a few women—you know—and all of a sudden, I get orders to go to Turkey or Serbia or Germany and set up and wait. How are they (security agencies) going to check my background if I’m country-bumpkin from west Iraq? You can’t. It’s impossible.”

On Nov. 19, the House approved the Syrian refugees bill that would block Syrian and Iraqi refugees from entering the country unless they pass strict background checks.

TIME reported, “The legislation requires the director of the FBI to vouch for the completion of a background investigation on each refugee, as well as to certify to Congress that they are not a security risk. The Secretary of Homeland Security and the Director of National Intelligence would also be required to certify to Congress that individual refugees are not security threats. And the bill stipulates that Homeland Security officials submit monthly and yearly reports to relevant congressional committees about the program.”

This bill will limit 10,000 refugees to enter the United States under the correct investigation.

“I’m almost to a point where I believe it doesn’t matter what we do. This war is going to be a never ending conflict, because the mentality of the participants is such that it’s really whether anyone wants to count on this or not. It’s not politically correct to say this, but it is Islam against the West,” said Roberts. “If I’m wrong, then why aren’t we seeing millions of Muslims rise up and condemn jihad? We’re simply not seeing any chorus of condemnation of jihad against the West by the Muslim world.”