As the trial approaches next week for the veteran accused of killing military sniper Chris Kyle and his friend Chad Littlefield, many local viewers of the new hit movie American Sniper said they believed the film would affect the trial proceedings.

“I believe it will be hard to find a jury who is not prejudiced because of the location (in Stephenville) and because of the movie coming out at this time,” said Melanie Gunn, a Tarleton State University freshman public relations and event management major. “It will complicate the trial, most definitely.”

Added Amanda Cohen, a freshman psychology major: “The movie was very emotional, so the jury members could be swayed strongly as to what they think about the situation.”

The capital murder trial is scheduled to begin on Feb. 11 in Stephenville at the Donald R. Jones Justice Center. Former Marine Eddie Ray Routh, 27, is accused of shooting Kyle and Littlefield in February 2013 at a gun range at Rough Creek Lodge.

Routh’s attorneys this week filed a request for continuance, meaning to delay the trial, saying their client cannot receive a fair trial at this time because of the way the film “continues to draw tremendous attention throughout the world.” On Feb. 3, District Judge Jason Cashon denied the request.

Routh had been diagnosed with post-traumatic stress disorder, or PTSD, and was hospitalized and released in the weeks before the shootings. Routh has pleaded not guilty to the crimes, and his defense attorneys have said they plan to use “diminished capacity” as a defense.

Texan News reporters interviewed more than 70 people in Stephenville and North Texas about the film, which is based on Kyle’s best-selling autobiography.

Kyle attended Tarleton but did not graduate. The university honored him as its most distinguished young alumnus in January 2013. He and his wife, Taya, and their two children lived in Midlothian.

Since the movie was released on Jan. 16, it has set box-office records. The film has been nominated for an Academy Award as best picture and Bradley Cooper, who portrays Kyle, is up for best actor.

Cooper put on 40 pounds of muscle for the role and worked with a voice coach to get down Kyle’s Texas twang. Those interviewed praised Cooper’s portrayal of the soldier.

“They even looked alike,” said Shelta Alexander, a sophomore animal science major. “Probably the best acting of Bradley Cooper’s I have ever seen. I don’t think I could watch The Hangover the same after seeing him in American Sniper.”

Although some critics claim the film glorifies war, director Clint Eastwood told the entertainment publication Variety that the film’s biggest anti-war statement is “what it does to the families left behind.”

Some of those who saw the film said it did a good job of showing how hard war can be on military families.

“For civilians, the movie really showcases the struggles and hardships our servicemen and -women face daily,” said Carter Brandt, a sophomore horticulture major. “People who criticize the military have no clue what is like to take a life, or to almost have your own life taken.”

Added Brandon Hyatt, a sophomore marketing major: “It lets us see what our soldiers go through for our country and the sacrifices they make such as missing vital points and moments of their children’s childhood.”

The movie touched on the stresses that Kyle experienced when he returned home after four tours of duty in Iraq. He wrote in his autobiography that he came back with PTSD, and he founded a company and a foundation to help vets make the transition to civilian life.

He was trying to help Routh by taking him shooting in a civilian setting when, according to law enforcement authorities, Routh shot Kyle and Littlefield and stole Kyle’s truck.

Those interviewed offered mixed opinions on whether PTSD should be a defense for murder.

Marissa Ryan, a senior nursing major, said did not believe PTSD “is an excuse or defense for murder. Someone suffering from PTSD should never be placed in a situation to cause harm to themselves or others and should receive proper treatment before allowing themselves to be put in a situation that could cause a reaction.”

“I believe murdering is murdering. Even if he does have mental problems, you know when you are pulling the trigger on somebody else’s life and he should have consequences.”

Daniel Gilmore, a sophomore bio-medical pre-physical therapy major, noted “there are many veterans in the world suffering from PTSD that do not go out and kill an American hero. I’m not sure if that excuse would be relevant to me.”

Others said that if he is convicted, Routh should get psychiatric help. Erath District Attorney Alan Nash is not seeking the death penalty for Routh.

“I personally believe PTSD is a form of insanity and while Routh shouldn’t serve his life in a mental facility, he should not be given life in jail or the death penalty,” said Chase Sikes, a Tarleton alumnus. 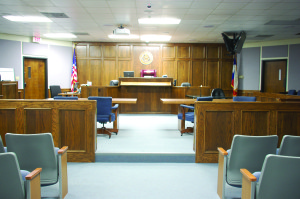 The courtroom in the Donald R. Jones Justice Center in Stephenville is where Routh’s trial will be held.
Photo by Sara Gann

“Because PTSD is mental disorder, in the eyes of the law, he is mentally ill and unstable,” noted Aidan Hartnett, a sophomore pre-law major.

Some viewers said they thought the movie did a disservice to Littlefield by not mentioning that he was also killed next to Kyle.

Routh was not depicted until the end of the film.

“The film only showed Routh for a few seconds, and it is showed him looking like a crazed maniac, which is not really fair to him,” Brandt said. “I think some people will assume he is guilty just because of how creepy he looked in the film.”

Chilo Carlson, an animal science pre-vet sophomore who was in the Marine Corps for four years and a trainer for small arms and hand-to-hand combat for six years, said the film portrayed Routh as a “crazy psychopath.”

“In reality, he was just a guy Chris was trying to help out that happened to be suffering from PTSD. I see the guy as someone that needed help.”

On the other hand, Carlson said, “Everyone that comes back from a war environment has some kind of after-effect, it’s just how much. Should they be able to use that as a defense? I don’t think so. And we’re not sure what level he had it at.”

Kyle and Littlefield were shot around 3 p.m. on Feb. 2, 2013, at Rough Creek Lodge’s gun range in Erath County. The victims were discovered by a Rough Creek Lodge employee and were unconscious and covered in blood. Both had been shot multiple times at close range.

According to an arrest warrant affidavit, Routh stole Kyle’s truck and drove to his sister’s house in Midlothian, where she said he confessed to the killings and said he “traded his soul for a new truck.”

He was arrested later that day after being apprehended on a Dallas freeway, charged with capital murder and brought back to Erath County.