BOSTON — A 90-year-old Holocaust survivor made his orchestral debut with renowned cellist Yo-Yo Ma on Tuesday to benefit a foundation dedicated to preserving the work of artists and musicians killed by the Nazis.

Ma and George Horner received floral bouquets and a standing ovation from their audience of about 1,000 people in Boston’s Symphony Hall. They appeared to enjoy their evening, chatting briefly between numbers and walking off the stage hand-in-hand after taking a bow together.

Before the performance, Ma and Horner met and embraced ahead of a brief rehearsal. Ma thanked Horner for helping the Terezin Music Foundation, named for the town of Terezin, site of an unusual Jewish ghetto in what was then German-occupied Czechoslovakia. Even amid death and hard labor, Nazi soldiers there allowed prisoners to stage performances. 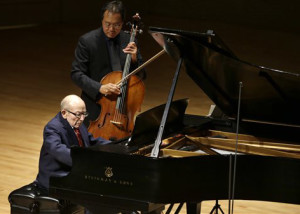 Holocaust survivor George Horner, front left, performs with cellist Yo-Yo Ma, top, on stage at Symphony Hall Tuesday, Oct. 22, 2013, in Boston. The 90-year-old pianist made his orchestral debut with Ma, where they played music composed 70 years ago at the Nazi concentration camp where Horner was imprisoned.
(AP Photo/Steven Senne)

They played music composed 70 years ago when Horner was incarcerated.

“It’s an extraordinary link to the past,” said concert organizer Mark Ludwig, who leads the foundation.

Horner played piano and accordion in the Terezin cabarets, including tunes written by fellow inmate Karel Svenk. On Tuesday, Horner played two of Svenk’s works solo — a march and a lullaby — and then teamed up with Ma for a third piece called “How Come the Black Man Sits in the Back of the Bus?”

Svenk did not survive the genocide. But his musical legacy has, due in part to a chance meeting of Ludwig, a scholar of Terezin composers, and Horner, who never forgot the songs that were written and played in captivity.

Still, Ludwig found it hard to ask Horner to perform pieces laden with such difficult memories.

“To ask somebody who … played this in the camps, that’s asking a lot,” said Ludwig.

Yet Horner, a retired doctor who lives near Philadelphia, readily agreed to what he described as a “noble” mission. It didn’t hurt that he would be sharing the stage with Ma — even if he thought Ludwig was joking at first.

“I told him, ‘Do you want me to swallow that one?'” Horner recalled with a laugh. “I couldn’t believe it because it’s a fantastic thing for me.”

Ma said before the performance that he hoped it will inspire people to a better future.

“I grew up with the words, ‘never again,'” said Ma, who was born 10 years after the end of World War II revealed the scope of the Holocaust. “It is kind of inconceivable that there are people who say the Holocaust didn’t exist. George Horner is a living contradiction of what those people are saying.”

“To me George Horner is a huge hero, and is a huge inspiration,” Ma said. “He is a witness to a window, and to a slice of history, that we never want to see again, and yet we keep seeing versions of that all over the world. I hope we are inspired by that and we keep that memory forever.”

Horner was 21 when he was freed by Allied soldiers in 1945 after being imprisoned at Terezin, Auschwitz and Buchenwald. His parents and sister perished in the camps.

And though his back still bears the scars of a Nazi beating, he remains spry and seems much younger than his 90 years.

When Horner found out about the duet with Ma, Ludwig said, “He was so excited, to me he sounded like a teenager.”