Homecoming 2014 kicks off with new tradition

For students in attendance Sunday night, Oct. 5, at Tarleton State University, homecoming 2014 brought many new changes to the existing line-up of traditions.

After the “Smokin’ Meats with Texan Greeks” event, there was a tailgate in Heritage Park that was centered on the ceremonious lighting of the Smokestack. This was the first time in homecoming history that there was an event to truly start off homecoming week. There were smaller events in the past, but this was the first time that students and teachers could celebrate school events with custom silicone wristbands, advertising this new tradition months before, getting everyone ready for the homecoming season.

After the purple light was switched on at 7:27 p.m., Tarleton students were treated to a free concert in Heritage 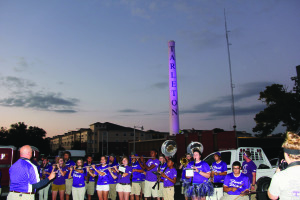 Park that featured Texas country music sensation and Tarleton alumnus Bart Crow. With the theme of the 2014 homecoming being “Deep in the Heart,” it was only fitting that this event also signify a Tarleton student returning home to put on a show for his Tarleton family.

Crow said that homecoming traditions at Tarleton were a beautiful celebration of the university, and he said his own experiences as a student during homecoming week were unforgettable.

Lowe said they are looking to make this a yearly tradition with live entertainment, such as a DJ, band or even an open mic night, every year to give the start of homecoming week a proper initiation.

Dr. Dottavio was also present for the initiation of the purple smokestack glow and addressed students in the crowd by sharing history of the smokestack and what it means to Tarleton.

“The smokestack is a strong representation of the core values at Tarleton, this one being tradition,” he said. “Traditions are important to us because they help us to connect with each other, and they help to remind us about what is so special about this university.”

Another tradition is being brought to TSU Monday, Oct. 6 at 4:30 p.m. outside the Nursing Building. While the “Launching of the Ducks” began last year, 2014 will add a new twist to this year old event by having purple water in the pools where the rubber ducks will be launched. During this event, a student will be given a rubber duck with the option to write on it their dreams or goals before launching it into the pools. The purple color and the ducks will remain in the pools until the start of the homecoming game Saturday, Oct. 11.