At the Tarleton Equine Center on Mondays around 3 p.m., horses stand still, tied up, and a neatly plowed arena waits. A half hour later, the quiet scene has erupted into action. The saddled equines’ ties get pulled loose and excited children laugh and exclaim, “I’m going to ride a horse today!”

The Tarleton Equine Assisted Therapeutic Riding program, or TREAT, has been a success since its establishment in 1995 with the help of Dr. David Snyder in Tarleton State University’s Animal Science Department. The program was created to use horseback riding as a form of physical, mental and emotional therapy.

Snyder estimated about 60 to 70 riders a week – some of them duplicates because they ride on both Mondays and Wednesdays – participate in the TREAT program. The riders include children from the Foster’s Home in Stephenville and people with mental, physical and emotional handicaps.

“The program is not meant for only the disabled, but also for people with emotional needs,” Snyder explained. 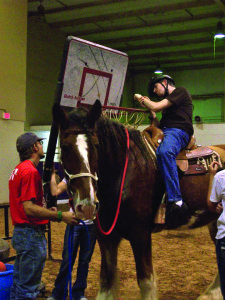 A rider shoots basketball hoops with the program’s Clydesdale, Brady, during a session.
(Photo courtesy of Dr. David Snyder)

Though many riders come voluntarily, Snyder noted one case in which a child was sent from his physical therapists to participate in the TREAT program because the boy’s therapists had learned of the benefits that can come with therapeutic riding.

Adults also have been part of the program. For example, during a reporter’s visit, a 30-year-old paraplegic man who had suffered brain damage arrived for his weekly ride on a big draft horse. The man had to be lifted from his wheelchair, swung over the horse and then placed in the saddle with Snyder behind him to help secure him for the ride. The man “has been coming here for 15 years and is slowly regaining his speech through interaction with those that assist him during his ride,” Snyder said.

Although a majority of the helpers are students “attending class,” many are volunteers who enjoy seeing what progress a horse can bring to a person. Two part-time staff members and two graduate assistants help as well. Altogether, this group of people makes TREAT possible every Monday and Wednesday from 3 to 6 p.m. While the program is highly regarded in the Stephenville community, Snyder feels it could be successful anywhere.

“There is an enormous amount of population that is still underserved,” he said.

Demand for TREAT’s services has grown so much, in fact, that it needs a bigger facility. The increased number of horses used in therapy has created problems in scheduling riding sessions and housing the horses. TREAT is currently raising funds from private donations to build a new $500,000 riding facility. Several possible sites are available at Tarleton Agriculture Center for a building with an indoor arena, an outdoor riding arena, an outdoor sensory trail and safe housing and feed storage for TREAT horses.

For the TREAT program to even be made possible, Tarleton finances the feed for the horses and furnishes the facility. Snyder maintained he has “never had to buy a horse in the 20 years that I have been with this program.” He explained that he “doesn’t take any horse out of the pasture.”

The horse involved in the TREAT program must be sound in more ways than one. In order for a person to be bale to use the movement of a horse’s shoulders to learn, or relearn, to walk, the horse cannot have any lameness or the person will be thrown off balance, he explained.

The program would ne be possible without the help of volunteers and private donors. Each semester, at least two fundraisers, known as the “Special Kids Rodeo,” are held.

TREAT rides cost $10 for a half-hour session. Scholarships are available.