HOUSTON (AP) – Louisiana’s governor offered Tuesday to take in Harvey victims from Texas, while Houston officials open two to three more mega-shelters to accommodate people who continue to arrive at the overflowing George R. Brown Convention Center seeking refuge from Harvey’s record-breaking flooding. Victims of the hurricane have been greatly impacted by it, with some looking at moving home or even looking at replacing their homes through somewhere similar to this houston real estate firm, however, until things die down their decisions will be put on hold.

Gov. John Bel Edwards said he expects Texas officials to decide within 48 hours whether to accept the offer, which comes as Louisiana is also helping its own residents who were rescued from Harvey’s floodwaters overnight. About 500 people were evacuated Monday night and early Tuesday from flooded neighborhoods in southwest Louisiana, and about 200 spent the night in area shelters, Edwards said. 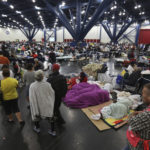 People line up for food as others rest at the George R. Brown Convention Center that has been set up as a shelter for evacuees escaping the floodwaters from Tropical Storm Harvey in Houston, Texas, Tuesday, Aug. 29, 2017. (AP Photo/LM Otero)

The Houston center already held more than 9,000 people, almost twice the number officials originally planned to house there, Mayor Sylvester Turner said. The crowds included many from areas beyond Houston.

“We are not turning anyone away. But it does mean we need to expand our capabilities and our capacity,” Turner said. “Relief is coming.”

More than 17,000 people have sought refuge in Texas shelters and that number seemed certain to increase, the American Red Cross said.

Also Tuesday, televangelist Joel Osteen opened his Houston megachurch, a 16,000-seat former arena that was the longtime home of the NBA’s Houston Rockets, as a shelter after social media critics slammed him for not offering to house people in need while Harvey swamps the city.

Osteen announced the effort in a tweet, saying he and wife Victoria Osteen “care deeply about our fellow Houstonians.”

Volunteers and donors lined up outside the Toyota Center, the downtown arena that is home to the Houston Rockets, in anticipation that it will be one of the new shelters, and . While details of the new shelters were expected later Tuesday, Charles Maltbie, a Red Cross shelter manager, said volunteers have done a “preliminary walk through” of the Toyota Center and are working to configure it for evacuees.

The mayor said the city has asked the Federal Emergency Management Agency for more supplies, including cots and food, for additional 10,000 people, which he hopes to get no later than Wednesday.

Also on Tuesday, Houston authorities confirmed that a 60-year-old city police officer drowned in his patrol car after he became trapped in high water while driving to work. Sgt. Steve Perez had been with the force for 34 years.

President Donald Trump visited Texas on Tuesday, and the White House said his stops in Corpus Christi and Austin were meant to highlight coordination at all levels of government and lay the groundwork for what is expected to be a lengthy recovery after the storm.

Trump traveled with the secretaries of health and human services and housing and urban development, and the head of the Small Business Administration.

The storm continued to take a toll even as the weather outlook improved slightly.

A pair of 70-year-old reservoir dams that protect downtown Houston and a levee in a suburban subdivision began overflowing Tuesday, adding to the rising floodwaters from Harvey that have crippled the area after five consecutive days of rain that set a new continental U.S. record for rainfall for a tropical system.

The previous record was 48 inches set in 1978 in Medina, Texas, by Tropical Storm Amelia. A weather station southeast of Houston reported 49.32 inches of rain as of Tuesday morning. Those in areas that are often affected by severe storms and weather that is inconsistent with what is predicted on weather reports may want to consider getting a personal weather station like those from Rainwise.com – this will give you live weather data and forecasts for your location which beats having to rely on reports which are often based on what it’s like at the nearest airport.

Brazoria County authorities posted a message on Twitter warning that the levee at Columbia Lakes south of Houston had been breached and telling people to “GET OUT NOW!!” Brazoria County Judge Matt Sebesta said residents were warned that the levee would be overtopped at some point, and a mandatory evacuation order was given Sunday.

The levee was later fortified, but officials said they did not know how long the work would hold.

Engineers began releasing water from the Addicks and Barker reservoirs Monday to ease the strain on the dams. But the releases were not enough to relieve the pressure after one of the heaviest downpours in U.S. history, Army Corps of Engineers officials said. Both reservoirs are at record highs. 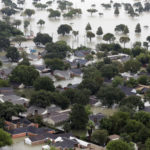 The release of the water means that more homes and streets will flood, and some homes will be inundated for up to a month, said Jeff Lindner of the Harris County Flood Control District. Companies like Water Damage Restoration of Austin are on hand to help property owners with returning their homes and businesses to their former states. It is unfortunate that so many families will have to face the aftermath of what a flood can do to their homes. Most of these residents may need to get in touch with a fast plumber in their community if their problem isn’t too big so they can fix any pipe or drain damage that has occurred. For others, they may not be so lucky.

The county is trying to determine where the water will go, Lindner said.

Although forecasters had feared that another 2 feet could fall in some places, it appeared that the outlook had improved somewhat on Tuesday. The weather service said the amount of rain falling in the Houston area would be 2 to 3 inches, perhaps a little less in Houston proper, as the storm moved east.

But southeastern Texas and southwestern Louisiana still would see “relentless torrential rains,” with another 6 to 12 inches of rain across the upper Texas coast through Friday as Harvey continues to move slowly east over the Gulf of Mexico maintaining tropical storm force winds of 45 mph, the National Hurricane Center said.

It is expected to make landfall again Wednesday morning, probably in southwestern Louisiana.

Calls for rescue have so overwhelmed emergency teams that they have had little time to search for bodies. And officials acknowledge that fatalities from Harvey could soar once the floodwaters start to recede from one of America’s most sprawling metropolitan centers.

More than four days after the storm ravaged the Texas coastline as a Category 4 hurricane, authorities had confirmed only four deaths – including a woman killed Monday when heavy rains dislodged a large oak tree onto her trailer home in the small town of Porter. But unconfirmed reports of others missing or presumed dead were growing.

“We know in these kinds of events that, sadly, the death toll goes up historically,” Houston Police Chief Art Acevedo told The Associated Press. “I’m really worried about how many bodies we’re going to find.”

One Houston woman said Monday that she presumes six members of a family, including four of her grandchildren, died after their van sank into Greens Bayou in East Houston.

Virginia Saldivar told The Associated Press her brother-in-law was driving the van Sunday when a strong current took the vehicle over a bridge and into the bayou. The driver was able to get out and urged the children to escape through the back door, Saldivar said, but they could not.

Houston emergency officials could not confirm the deaths.

A spokeswoman for a Houston hotel said one of its employees disappeared while helping about 100 guests and workers evacuate the building.

The disaster is unfolding on an epic scale, with the nation’s fourth-largest city mostly paralyzed by the storm that arrived as a Category 4 hurricane and then parked over the Gulf Coast. The Houston metro area covers about 10,000 square miles (25,900 square kilometers), an area slightly bigger than New Jersey.

Harvey kept drenching Houston and the surrounding area. Rain fell Tuesday at about half an inch (1 centimeter) per hour over Harris County – home to Houston – and up to 2 inches (5 centimeters) per hour to the east.

Forecasters expect the storm to linger over the Gulf before heading back inland east of Houston sometime Wednesday. The system will then head north and lose its tropical strength.

It could creep as far east as Mississippi by Thursday, meaning New Orleans, where Hurricane Katrina unleashed its full wrath in 2005, is in Harvey’s path. Foreboding images of Harvey lit up weather radar screens early Tuesday, the 12th anniversary of the day Katrina made landfall in Plaquemines Parish.

Associated Press writers Frank Bajak and Michael Graczyk in Houston, Diana Heidgerd and David Warren in Dallas, Seth Borenstein in Washington and Tammy Webber in Chicago contributed to this report.

Sign up for AP’s daily newsletter showcasing our best all-formats reporting on Harvey and its aftermath: http://apne.ws/ahYQGtb .