Hundreds of Tarleton students could be carrying a handgun this fall

It’s nearly a month into active campus carry, and Texans still have questions. Aug. 1 was a milestone day for Texas, as Senate Bill 11 went into effect. S.B. 11, known as the campus carry law, allows concealed handgun license holders to carry on university campuses.

According to TexanFacts, the fall semester of 2015 had 7,337 students registered at Tarleton that were 21 years and older. The Texas Department of Public Safety (DPS) recorded that 3.4 percent of the Texan population was actively licensed or certified to instruct concealed handgun classes in 2015.

If 4 percent of the state now has a concealed handgun license and there is an estimated 7,700 eligible Tarleton students, around 308 students could be carring on campus throughout the semester.

Out of Texas’ 43,924 convicted crimes in 2015, handgun license holders committed 108 of those crimes. This is only 0.25 percent of the convictions. This is lower than in 2013 when 50,869 crimes were committed, with 158 of those crimes committed by licensed handgun carriers at 0.31 percent. This seems to correlate with the growing opinion that most handgun users conceal carry for personal protection, rather than for any criminal reason, with firearms such as the 9 mm and 10 mm handgun as a favorite among gun owners. 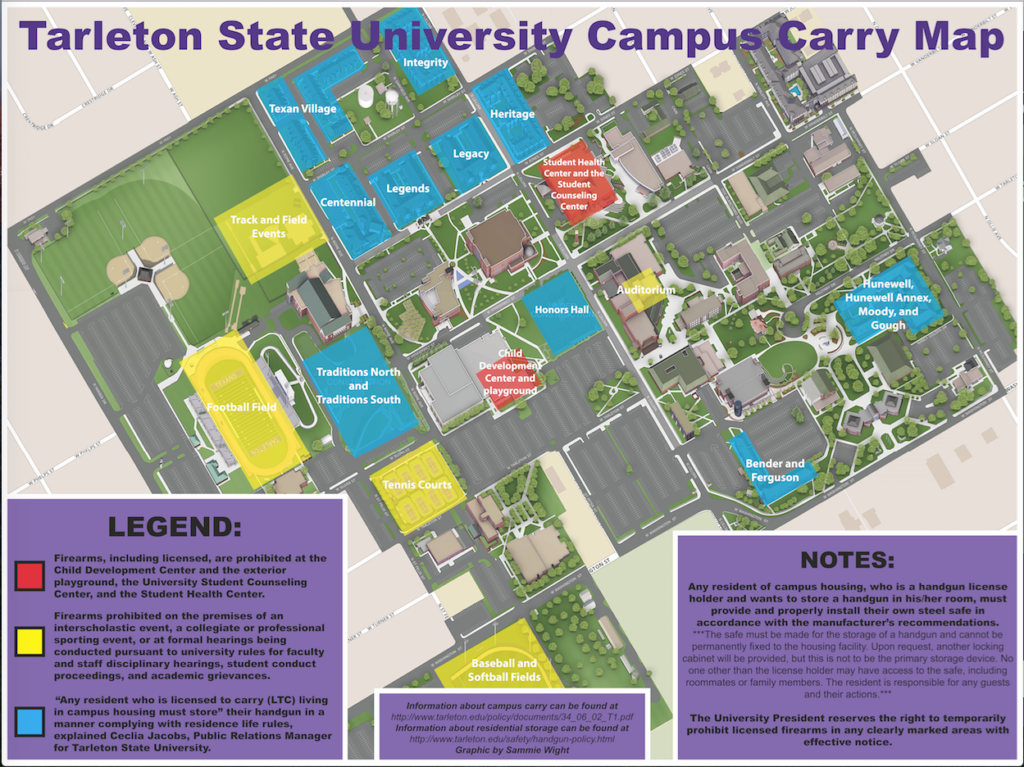 This Campus Carry map for Tarleton points out where “gun free” zones are and how to store your handgun in a residence hall.
Graphic by Sammie Wight, Texan News.

“When we looked at it, people who had gone through this kind of training, statistically are much more law abiding citizens than the average citizen,” Tarleton Police Chief Matt Welch said.

Concealed handgun licenses in Texas require the holder to be 21 years old or older unless active in the military; active military can be licensed at 18 or older. To get a license, the person must be a legal resident of Texas for six months with no felony convictions or Class A or Class B misdemeanors. He or she cannot be chemically dependent, which, as www.draonline.org says, is “a primary illness or disease which is characterized by addiction to a mood-altering chemical.” He or she must also have sound judgment of the use and storage of handguns. For a full list of requirements, please go to www.texaschl.us/eligibility.

The Campus Carry law does, however, allow universities to make regulations specific to the campuses. President Dominic Dottavio created the Campus Carry Council, which consisted of faculty, staff and students to create the best rules and regulations for Tarleton’s campuses.

University police or other applicable law enforcement will enforce these rules, but violators will also be subject to a violation of the university’s rules; this includes students, faculty and staff.

Tarleton allows license holders to carry in all on-campus housing, however, students living in residence halls that are licensed to carry a handgun must store their handguns according to Residence Life rules. These state, “Any resident who is licensed to carry a concealed handgun and chooses to bring the handgun into their residence hall room/apartment must store his/her handgun and ammunition in a combination or electronic locking steel safe when the handgun is not on or about their person.”

According to Tarleton’s handgun policy, Tarleton will not provide the mandatory safe, but it will provide, at the request of the resident, an extra locking cabinet. The safe must be designed specifically for storing a handgun and not permanently fixed to the residence hall. No one can have access to the safe, and residents will be held responsible for the actions of any guests while on campus. These rules still apply whether the resident is an experienced license holder or have just purchased their first handgun through any online or offline retailer (see it here).

However, there are also areas on campus that are restricted on occasion. These events include college-sporting events, high school sporting events and high school interscholastic competitions. Firearms are also prohibited during formal university employee disciplinary hearings and student conduct and academic proceedings.

“If you are going to go to a football game, tailgating is not considered part of the football game,” Welch said. “It’s just the game itself.” He also explained that license holders can carry at intramural games, but events like track and field meets temporarily prohibit handguns.

According to Section 30.06, Penal Code, the president of the university reserves the right to temporarily prohibit guns from an area. The president is the only one with the power to restrict campus areas like this, and no university employee can act in his stead. This restriction is only temporary and must be clearly marked according to Section 30.06.

The Campus Carry law requires that the licensed handgun be concealed at all times. If someone sees a gun and feels threatened, they should call the police.

However, Welch said, “‘Is the person making a concerted effort to conceal it?’ […] We’re going to approach people very low key, very calmly.”

If stopped on campus while legally carrying a handgun, understand the law and be very transparent with the officer. Welch said, “It’s always good to say ‘I’m a licensed gun carrier, I’m carrying a gun right now, would you like me to retrieve my I.D.?’ Ask the officer, be very calm and compliant, make slow moves. […] Articulate what you’re going to do.”