Huyen Pham speaks about the constitutional status of immigrants

In honor of Constitution Day, guest speaker Huyen Pham came to Tarleton State University to give a talk discussing the constitutional status of immigrants. Pham, who spoke at Tarleton on Monday, earned her degree at Harvard and is now a Professor and associate dean of the Texas A&M School of law.

The main focus of the discussion was the travel ban case that the Supreme Court is going to hear, also known as Trump vs. Hawaii. 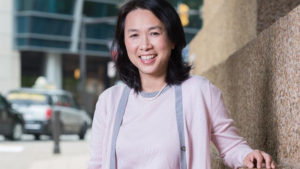 Huyen Pham is also the president of Hong Bang, Inc., a non-profit organization that supports poor communities in Vietnam. They send volunteers to work in these communities and provide financial support.
Photo by law.tamu.edu

The travel ban has since been revised after being initially enacted. In simplistic terms, the ban has been revised as a 90-day ban on almost all admissions from six majority Muslim countries: Libya, Syria, Sudan, Iran, Somalia, and Yemen.

Does the travel ban violate the Establishment clause of the first Amendment?

Pham notes that this is the key question in this case. Pham says there is also a factual and threshold question to be asked here:

Factual – Was the travel ban enacted for the purpose of excluding Muslims? 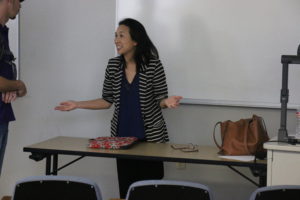 Huyen Pham speaks at Tarleton State University with her talk titled, “The Unique and Ordinary Constitutional Status of Immigrants.”
Photo by Latricia Powell

During the talk, Pham included many examples of other travel ban cases that have happened throughout U.S. history and how they can relate to Trump vs. Hawaii.

Pham says that this issue is more about the territorial aspect. These immigrants are not on U.S. land, and that will play a part in these discussions with the Supreme Court. Although Trump has certain defenses like national security on his side, Pham says that with the results of the other circuits, it’s still going to be an interesting case and could result either way.

The Supreme Court will hear the oral arguments on October 10.