On Thursday night in the Fine Arts Center, students gathered for a panel-style discussion about the 2016 presidential election. The discussion was one of many events that kicked off Tarleton’s Centennial Celebration. 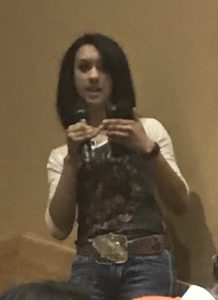 One student asked a few questions she had prepared for the panelists. Photo by Texan News

The discussion was a collaborative effort by Residential Coordinator Briana Welsh and associate professor of history Dr. Michael Landis, who both moderated the event. After offering a similar forum to her students in the fall semester, Welsh said that she wanted to give more students the opportunity to speak their minds.

“A lot of students were saying that they wanted to have a safe space to talk about the presidential election, what was going to happen, and how [the election] is going to affect them and their lives once they graduate.” Welsh said during the event’s introduction. “I took the liberty of gathering a couple of faculty members to speak about a few specific areas and how President Trump is going to affect those areas.”

Dr. Landis also gave some opening remarks, and encouraged participants to be “honest and courageous” when engaging in the discussion. 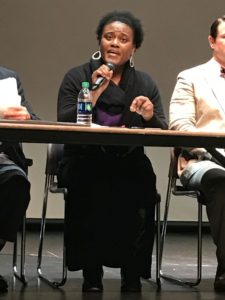 Those were recurring themes on both sides of the panel throughout the evening.

One by one, students stood up to ask questions on everything from the term “alternative facts” to the funding of Trump’s wall and voter turnout. Students and faculty engaged in conversations about race relations as well as the media’s role in the election. The dialogue even continued after the panel was over, with students approaching professors and conversing one-on-one.

Both Welsh and Landis believed the event accomplished what it was meant to do.

“We wanted to create that communication and dialogue, as well as that relationship between students and faculty that they may not have in the classroom.” Welsh said. “People were able to agree to disagree and nobody left feeling heated.”

“I was very proud. I wish we had more time to hear more.” Landis said. “Perhaps we can have more events like this.”