PODAMPETTA, India — Agya Amma’s house in this seaside village was flattened by the cyclone that roared in from the Bay of Bengal with torrential rains and winds topping 200 kilometers (131 miles) per hour. But the fact that she was still here on Monday, surveying the pile of twisted wood and shredded thatch that had been her home, was proof that this was a different kind of disaster for India.

Unlike past storms that have lashed India’s eastern coast, Cyclone Phailin did not extract a heavy human toll, thanks to a massive and improbable evacuation effort that effectively moved nearly 1 million residents of one of India’s poorest regions out of the storm’s path and into government shelters. 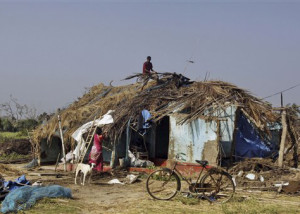 An Indian couple repair their home at the cyclone affected Haripur village in Ganjam district, Orissa state, India, Monday, Oct. 14, 2013. A mass government evacuation of nearly 1 million people spared India the widespread deaths many had feared from the powerful weekend cyclone Phailin, which destroyed hundreds of millions of dollars’ worth of crops and tens of thousands of homes.
(AP Photo/Biswaranjan Rout)

By Monday, only 25 people had been reported killed, even though tens of thousands of homes were destroyed. The successful evacuation effort was earning rare praise for a country known for large-scale disasters that have caused high death tolls. In 1999, a cyclone that struck the same coast killed about 10,000 people, while more than 6,000 were killed in June by flooding and mudslides in another Indian state, Uttarakhand.

“If we had stayed here, everyone in the village would be dead,” said Amma, a 55-year-old fisherwoman. “I consider myself lucky to be alive.”

Despite the comparatively low number of deaths, Phailin still dealt its share of misery, as hundreds of thousands of coastal residents found themselves huddling in shelters, their homes flattened and crops destroyed by the most powerful storm to hit India in more than a decade.

At least four days before the cyclone hit, police in the coastal states of Orissa and Andhra Pradesh began traveling through villages to warn residents of the coming storm and urge them to go to government shelters set up in schools and other concrete buildings.

While a few chose to ignore the warnings or stay home to guard their belongings, many had lived through the cyclone 14 years ago that killed 10,000.

By Friday, the day before the cyclone hit land, hundreds of thousands of people had moved inland. Amma and others from her tiny village of Podampetta walked 1.5 kilometers (a mile) to the nearest shelter and spent two nights waiting out the storm.

On Monday, residents ventured out to see the destruction, and many of them learned that they had lost everything.

“There is nothing to eat, no place for me to stay,” said Buchi Amma, 50, another Podampetta villager not related to Agya Amma. She said she had no idea how she and her husband would be able to buy food.

“I only want life to get back to normal,” she said, standing atop the concrete slabs of her shattered home.

A lake the size of a football field, formed when sea water surged ashore, cut across the main road out of Podampetta.

For the tens of thousands made homeless, authorities were distributing tarps so people could build makeshift shelters, state police official M.N. Rao said.

“Relief centers have been opened, and food is being supplied to the people, both dry rations as well as cooked food when possible,” he said.

The death toll of 25 was expected to rise as officials reach isolated areas along the cyclone-battered coast, and parts of Orissa were still facing massive flooding after heavy rains brought by the cyclone caused rivers to overflow.

Hundreds of thousands of people were marooned Monday in the district of Balasore, where the situation “is critical,” according to P.K. Mohapatra, the state’s head of relief operations. Authorities were air-dropping packages of food in the area, while army personnel and speed boats were deployed to help with rescue and relief operations.

The Indian coast guard rescued 17 sailors whose cargo ship, the MV Bingo, sank during the cyclone, officials said. They were taken to a hospital in Kolkata for a check-up and are safe now, coast guard Commandant Rajendra Nath told the Press Trust of India news agency.

Meanwhile, the weakened storm was moving north Monday over the state of Bihar toward the Himalayan state of Sikkim, which was bracing for heavy rains.

The Indian Ocean is a cyclone hot spot. Of the 35 deadliest storms in recorded history, 27 have come through the Bay of Bengal — including the 1999 cyclone — and have landed in either India or Bangladesh.