Many freshmen and sophomore students at Tarleton State University had issues this summer with obtaining a room for the 2018-2019 school year.

Currently, eight different residential facilities are available for first-year students. The initial bed count of 1,888 spaces was based off a freshmen class of 2,000 with 89 percent of the students residing on campus.

An upcoming freshman who asked to remain anonymous said that they were waiting for a room from February until June. 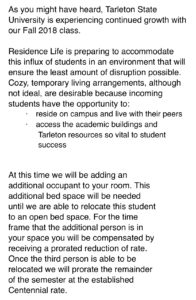 The student who was granted anonymity received this email regarding their housing situation. Screenshot by Ashley Inge.

“I filled out my housing application in February and then I checked back and I never had a room or anything. They said it was something on their part that they had to do, that they had to click a button or something. I don‘t really know. They did that and I kept on checking and they said they didn’t have any dorms available, but my friends that came here kept on getting dorms. And I kept on calling and they were like ‘well, we don’t have any available, it’ll just happen eventually,’” the student said.

The student was waiting for a dorm for several months and finally received a room in June.

“In June when I came to orientation, I had to go talk to housing and they put me in a dorm. They were like ‘well, we were just behind’ and I was like ‘well, but my friend that filled out an application in April got a dorm room before I did,’” the student said.

According to the 2014-2016 Residential Living and Learning Housing Contract, all first-time, first-year students are required to live on campus for two full academic years.

Ben Kunze, director of facilities and special events, said that each student is guaranteed a room on campus. He explained the process that the housing office has to go through each year to accommodate rooms for students.

“We guarantee all first and second-year students a space on campus, as part of the two-year live-on requirement,” he said.

“Between the drops for non-registration and the cancellations that we receive during the summer, we have not had an issue with making sure that all our students that are required to live on campus, receive a space. If there were to be a sudden surge in numbers last minute, then we would release sophomore students, if they are interested in moving off-campus based on their GPA’s, as requested by SGA (Student Government Association) several years ago,” Kunze explained.

Tiffany Tran, a sophomore at Tarleton, also had some issues with housing when her room assignment disappeared.

“Sometime in July, I was taken out of my room assignment and was very confused as to why. I believe it was because they assumed I was not coming back because of being academically suspended even though I was already told back in May that I was able to come back when I had a meeting with the dean. They did this to everyone that was under suspension,” Tran explained.

Tran said she had to call different people multiple times to try to figure out what was going on. She said she got several different answers.

“Some said it would’ve taken weeks to be put back into a room and most likely wouldn’t be put back into my original room. They told me they were just focusing on people that had no room to begin with, but I assume after bothering and angrily calling a few times they put me back into my room,” Tran said.

Kunze said that sometimes, it will seem like rooms are full and that there are no spaces left on campus. This hasn’t been an issue since construction was completed on the five new residential facilities.

“If Tarleton starts to increase the number of students in the first-year class again, we will need to review our current room inventories and look at our processes,” Kunze added.

“We will work on assignments all the way up until move-in day to try and get as many of our students into their preferred halls as possible,” Kunze said.

Kunze said that is not always possible to get students into the residential hall that they would like to be in because some halls are more popular and more preferred than others. If a student isn’t able to be placed into their preferred hall before they move in, they can be placed on a wait list for the hall of their choice. Students can also ask to be placed on a wait list after move-in day. During the fall semester or at the beginning of the spring semester, housing officials should be able to accommodate the students’ requests.

Move-in days were on Sunday, Aug. 19 and Monday, Aug. 20. The anonymous student said that they didn’t think that they were going to have a room by move-in day.

“I went through the rest of high school thinking I was going to be homeless,” the student said.

The student also received an email from housing assignment coordinator Kelly Roel on Aug. 16 letting the student know that they were going to receive an additional occupant to their room.

The email stated: “As you might have heard, Tarleton State University is experiencing continued growth with our Fall 2018 class. Residence Life is preparing to accommodate this influx of students in an environment that will ensure the least amount of disruption possible. … At this time we will be adding an additional occupant to your room. This additional bed space will be needed until we are able to relocate this student to an open bed space.”

Mike Leese, vice president of student affairs, said that last fall, Tarleton had 100 extra bed spaces. But for fall 2018, Tarleton is short 106 bed spaces, which was the reason for putting a third person in some rooms.

”We used the largest rooms in some of the traditional halls, and the common areas in some of the newer halls. One of our first priorities was to make sure that everyone had easy access to a bath and at least a limited amount of privacy. Our other option was to put first-year students off-campus in hotels, and we felt that it was much more important for them to be on-campus for Transition Week,” Leese said. 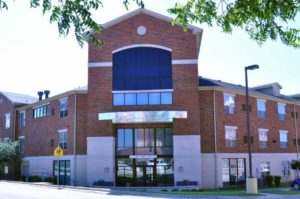 Currently 49 out of 55 rooms in Centennial are still housing a third roommate. Although some students have to live with the uncomfortable arrangements, the situation is expected to be resolved by the end of the first week of school. Photo courtesy of tarleton.edu.

Currently, 49 out of 55 rooms in Centennial residence hall are still housing a third roommate. Although some students have to live with the uncomfortable arrangements, the situation is getting resolved.

“The 106 beds that we were short at the beginning of move-in is now down to 49,” Leese explained. “Those students [that] are in Centennial and over-assignments in Traditions and Integrity have been resolved. Residence Life is making phone calls and releasing some upperclassmen who have decided to move off-campus.”

“Once returning students have completed moving in this weekend, we will know exactly where we are, and expect that all of this will be resolved by the end of the first week of classes,” Leese said.