The residents of Integrity Hall have faced many challenges upon moving into their new homes away from home. While some were lucky enough to decorate their new rooms with their families, others had to leave their bags packed in a hotel room.

Integrity Hall is Tarleton’s newest Residence Hall and is located at the edge of campus along W. Frey and Lillian streets. Integrity Hall is a companion facility to Heritage Hall. The construction for Integrity began in the summer of 2014 and has yet to come to a stop.

Just days before they were supposed to move in, a great deal of residents were informed that they were going to be housed in a hotel temporarily instead of their residence hall for the first week of school.

“There were several events that delayed the move-in date, but one of the biggest was definitely the rain and floods that we experienced in April and May,” said Bobby Waddell, the director of housing at Tarleton.

Waddell also said that the residence hall was nearly ready for its occupants when the rain began pouring the Thursday before move-in and flooded some of the rooms. This left Residential Living and Learning staff to temporarily place these specific students in hotel rooms, and even some Residential Leaders were placed in the hotel as well.

“We were in the office late hours finding those who needed to be contacted about the conditions of their room and letting them know about their temporary locations,” he said. 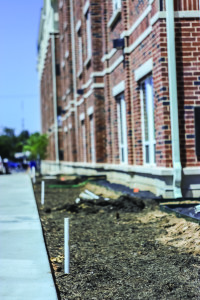 Though Integrity stands unfinished, students have already begun to settle into their homes that they will inhabit for the school year.
(Photo by Cameron Cook)

Both Waddell’s and Middleton’s biggest concerns were that the building was a safe and inhabitable environment for the time being.

“The safety of the students is our number one priority. Everything else is minor setbacks, like the locks on the doors, washers and driers, etc.,” said Middleton.

Waddell said that he was very pleased by the parents’ responses to the conditions of the building as he apologized to them about the delay on move-in day.

“They were all very understanding and accepting, which was a relief,” Waddell said.

However, some residents were not so pleased with the conditions of Integrity upon move-in.

Britni Bratton, a sophomore living on the fourth floor of Integrity, said, “I have had many maintenance problems since the day I moved in. I do think that those students who had to be placed in hotel rooms—had their rooms flooded, broken air conditioners, and missing appliances—should somehow be reimbursed, because it was supposed to be fully ready by the time of move-in,” she said.

Although Bratton was not satisfied with the conditions that Integrity was in upon move in, she said she likes the space Integrity gives them in their rooms and living area.

She also said, “Maintenance and RL’s really do care about our living conditions and try and be as quick as possible about coming to fix any situation we have. Though it doesn’t always happen that way. I understand there are a lot of residents in this hall, and they can’t get to everyone in one day. We just have to be patient.”

Samantha Parrish, a sophomore living on the second floor of Integrity, said, “I’m okay with the condition, but it would have been nice if they had it finished, seeing as how much money we are paying to live in the hall.”

She also said, “The RL’s are very helpful. Overall, it is a great place to live on campus, and I love the full size beds.”

Waddell said he had a conversation with the Balfour Beatty Construction, who was responsible for the construction of Integrity. He said that they improved their communication for the future, and he stressed to them the importance of the accuracy of timelines.

“We needed to improve our communication and the accuracy of the timelines that they had originally given to us, because this should’ve been done in time. Basically, I had to let them know and understand that this kind of thing cannot come late.”

Waddell said he is still exploring ways to make it right with those residents that were impacted by their move-in experience.

Middleton added that he is always happy to answer questions and that he updates the portal on TexanSync for residents every Monday.

Waddell also wanted to add that, if residents have any concerns, he has a “phenomenal” group of RL’s that are working diligently to make sure that students’ needs are met.