Haley Abrahamson, a 22-year-old kinesiology major from Georgetown, Holly Noles, a 25-year-old alumna from Dublin, and Shelbie Bradley, a 20-year-old political science major from Alvarado, each have worked for the congressman.

“More than anything, I learned about myself and my aspirations and my ability to make the necessary connections to do what I want to do,” said Abrahamson. “For me, it was more of a making- connections internship than trying to go work up there.”

Abrahamson said she did a lot of computer work, sorted mail, gave tours, attended committee meetings and responded to letters from constituents – an experience she said few congressional interns get. She learned about the internship through an email that was sent to the student body.

“It caught my eye and I started thinking about it,” she said. “I saw D.C. and it jumped at me. It made sense.” She had wanted to study political science abroad in Scotland but wound up applying for the internship.

She said she believes the internship will help her achieve her goal of working with public policies. 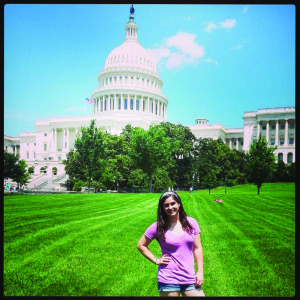 “Eventually I want to work with P.E. and nutrition policies in public schools,” she explained. “I think that seeing the legal side, seeing how everything works and how changes are implemented really gave me an idea on what it will take to do what I want to do.”

Noles, who has a master’s in business, says she’s learned to deal with people from all walks of life working for Carter.

She said there’s some politics in the job, but “you learn what’s really important in life.”

She’s now working as the congressman’s executive assistant in charge of his schedule and planning what he’s going to do each day.

“I filter through requests and decide who he’s going to meet with,” Noles said, “and then I also handle foreign affairs.” Noles added she has to follow legislation in the works that affects her constituents.

The opportunity to become an intern, she said, came through a former Tarleton student, Casey Hogan, who is an assistant athletic director for Tarleton

“Thankfully, I was at the right time and right place,” Noles said. Two days before she was to return home from D.C., Hogan told her that Carter wanted to keep her on as his executive assistant.

“Sometimes life leads you places, to things that you didn’t even know existed,” Noles says. She didn’t plan on working for the congressman, but so far it has opened doors for her.

Bradley hopes her internship wil help her one day become an attorney. She said she has learned how government works through this internship and that it will help her later in life.

“I learned about how Congress really works and how politics work,” she explained “My favorite job was giving tours of the United States Capitol. I got to read and respond to constituents, which most interns don’t get to do.”

The opportunity to become an intern came from an email that Dr. Dean Minix, professor of social sciences, had sent out.

“Once I became an upperclassman, I applied,” she said. At the time when she was applying, everything in Bradley’s life was going well. However, after she had found out that she got the position, she also had a very difficult family emergency to deal with. Her mother had a brain aneurysm. This meant Bradley had a decision to make, whether to go to D.C. or stay home.

“It was a tough decision,” Bradley said. However, while she was trying to make her decision, her mom was coming out of her coma. Even though she was still weak she told her daughter to take the internship and go to Washington.

“Shelbie,” her mother said, “I want you to go to D.C.” Bradley calls her mother a “living miracle.”

As tough as her decision was, Bradley made the choice to take the internship and work for the congressman in D.C. “I have a better understanding on how government works,” Bradley said, “I feel like this internship has prepared me for my future goals.”

Minix, a political scientist and former dean of the College of Liberal and Fine Arts, said congressional interns learn the inner workings of government, the dynamics of a congressional office, the dance of the legislative process, as well as develop interpersonal relationships with lawmakers and their staff.

“Congressional internships offer an outstanding opportunity to merge the classroom with the hearing room,” Minix said.