“The turf wasn’t ready, we lost a field for the parking lot, the field for the javelin and discus, we were down to three fields and we can’t do softball on two fields,” Nimmo said. 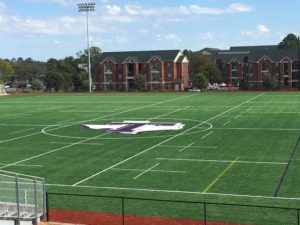 Intramural softball was cancelled after the turf field wasn’t completed on time. Photo by Danny Hernandez

Nimmo and his staff battled time and the construction of the turf field. Softball wasn’t the only intramural sport occurring during the fall semester that Nimmo’s staff also had to prepare for.

“Rain delayed the turf project,” Nimmo said. “We had to do something. So we delayed softball, then we cancelled it altogether. We delayed football and then started football three weeks late, so that’s where we’re at.”

Although the intramural softball season for the fall semester was cancelled, Tarleton students will still have the opportunity to play some softball this semester. “I believe Nov. 19 and 20 we will be having a softball tournament, so hopefully that eases everyone’s feelings,” Nimmo said.

With softball being a popular intramural sport at Tarleton, Nimmo says it was difficult to have to cancel it all together.

“It’s just one of those things where we (rec sports staff) had to make a decision and UBU (the turf company) couldn’t tell us exactly when those fields were going to be ready,” he said. “We were stuck in a bind.”

Nimmo says that the upcoming softball tournament will be it for the fall until the spring semester. He said that he felt positive that a delay like this wouldn’t happen in the future.

“It was a delay on the turf and that’s all,” he added.

Dealing with weather, time, the turf company and other intramurals sports, Nimmo and his staff worked to keep students happy and make intramural sports run smoothly. “We didn’t have intramural softball six years ago,” he mentioned.