Iraq veteran sides with Kaepernick, “I would sit with him”

Iraq veteran and current Tarleton State University student, Adrian Blunt, said he’s concerned about how veterans are supported after their service. The veteran weighed in on the controversy of 49ers’s quarterback, Colin Kaepernick’s refusal to stand during the national anthem, saying he’d sit with Kaepernick to support the issues behind police brutality.

Blunt, 26, a sophomore at Tarleton, served in the United States Marine Corps from 2009 to 2015 working in field radio operations. A graduate of Temple High School, Blunt had plans to play football for Baylor University, but ended up joining the military a week after his twin sister did.

Blunt describes military life as being much different from what he was expecting. “I expected it to be how you see it in movies, you know stuff going off everywhere… bombs here, bombs there, explosions, gun fights. [It] wasn’t nothing like that though. It was completely different… completely different.” Blunt described his experiences with combat as scary and tough. 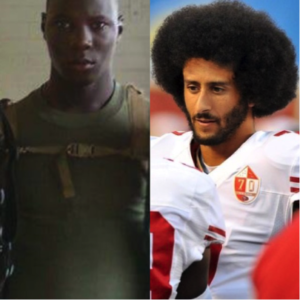 “It’s not training. Like, they’re forreal like tryna take your life. In the movies, everybody just seems like ‘yo gung ho lets go, lets get it, I dont care.’ But I mean, you do care and you don’t wanna die. You don’t want the person, your brother next to you to die. You want everybody to make it out and it’s just not like that. Some people they do fall. Some people go down and you just gotta keep moving. It’s tough, it’s really tough,” Blunt said.

Even though Blunt has served his country for six years, when the topic of Kaepernick’s refusal to stand during the national anthem was brought up, Blunt said he didn’t feel disrespected by Kaepernick’s protest but actually said he supported him.

“I don’t feel disrespected by it because [for] one I fought to protect those rights. He has a right to not stand just like I had a right to not join [the military] but I chose to anyway. I fought and I’ve protected those rights, so if that’s what he chooses to do, then so be it. I’d be a hypocrite if I were to say ‘hey that’s wrong for you to do that’ even though I’ve fought for that freedom,” Blunt added.  “I understand why he’s protesting. He’s not protesting the military, he’s not protesting The United States. He’s protesting police brutality in America. That’s what a lot of people are failing to realize. They think he has something against this country and he doesn’t. It’s just his way of saying ‘hey I’m not gonna stand for police brutality,’ especially against African-Americans being slipped under the rug as if they’re lives don’t matter. He has that right, he has that freedom, he’s in this country and we fought for that.”

Blunt said that he would join Kaepernick’s protest if he was on the football field with him. “I would sit with him. As a veteran, I really would. Nothing against this country, but I understand where he is coming from and I believe that what he is saying as far as…the police brutality in this country, he’s right. He’s completely right…it’s really ridiculous.”

Although Blunt supports Kaepernick’s protest, he said that there seems to be a lack of gratitude for veterans. “I’m not expecting people to just fall on my feet and praise me for the things that I’ve done ’cause like I said… y’all didn’t ask me to go over there. It’s something that I asked for, but don’t disrespect me as if I’ve not given anything. Don’t disrespect me as if I’ve not lost anything.”

Blunt also said that those who accuse veterans of ‘asking for too much’ simply cannot relate to the struggles that those veterans face. “We understand that nobody asked us, you know- to sign our life away, or to sign up for the military. I know that’s something that we did on our own [and] that was our own decision but at the same time… as a civilian, you’ll never understand what it’s like to go over there…you’ll never understand what it’s like to be a part of something much greater than yourself… to be willing to die for a guy that you only met a few months ago. That’s what it’s about”