IRBIL, Iraq (AP) — Dozens of Iraq’s Kurdish peshmerga fighters will fly to Turkey on Tuesday and from there cross into the Syrian border town of Kobani to help fellow Kurds fight Muslim militants, a spokesman for the Kurdish force said.

According to the spokesman, Halgurd Hekmat, the peshmerga fighters will leave the city of Irbil, in Iraq’s semi-autonomous Kurdish region, later in the day. He gave no further details.

Last week, the local Iraqi Kurdish government authorized the peshmerga forces to go to neighboring Syria and help fellow Kurds combat Islamic State militants in Kobani. A total of 150 peshmerga fighters were authorized to go to Kobani through Turkey.

Turkey, which has riled Kurdish leaders and frustrated Washington by refusing to allow fighters or weapons into Kobani, said last week it would help Iraqi Kurdish fighters cross into Syria.

The unprecedented deployment will provide much-needed boots on the ground in Kobani, although it is not clear whether the fighters will be allowed to carry enough weapons to make an impact.

On Tuesday afternoon, a large peshmerga convoy with heavy weapons was seen in Irbil, driving toward the Iraqi Kurdish area of Dohuk.

The convoy was moving by land and it was not immediately clear if the fighters had left or would leave on a plane and the convoy would drive to Turkey.

Idriss Nassan, a Kurdish official from Kobani, told The Associated Press that they have no confirmation that peshmerga fighters were to arrive Tuesday. “We have no information other than what we are reading on social media or hearing on the news,” Nassan said by telephone from Turkey.

He added that the peshmerga command might have direct contact with the Syrian Kurdish force known as the Peoples’ Protection Units, or YPG, and for that reason Kurdish politicians in Syria are not aware of the movement.

The Islamic State group launched its offensive on Kobani and nearby villages in mid-September in battles that have killed more than 800 people, according to activists.

The extremists captured dozens of Kurdish villages around Kobani and now also control parts of the town. The battles also made more than 200,000 people flee for safety across the border into Turkey. 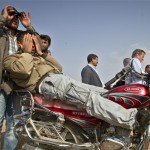 People watch the town of Kobani during airstrikes by the US led coalition seen from the outskirts of Suruc, near the Turkey-Syria border, Tuesday, Oct. 28, 2014. Kobani, also known as Ayn Arab, and its surrounding areas, has been under assault by extremists of the Islamic State group since mid-September and is being defended by Kurdish fighters. (AP Photo/Vadim Ghirda)

The U.S. has carried out dozens of airstrikes targeting the militants in and around the town to try and blunt their advance. The U.S. Central Command said in a statement that U.S. military forces carried out four airstrikes near Kobani in the past 24 hours, destroying four IS fighting positions and a small IS unit.

An AP reporter on the Turkish side of the border facing Kobani reported seeing several airstrikes by the U.S.-led coalition on Tuesday. Occasional shooting could be heard from the town.

The Britain-based Syrian Observatory for Human Rights said that the U.S.-led coalition carried out three airstrikes on Kobani in Tuesday, adding that they targeted a gathering of Islamic State fighters.

In Berlin, Syria’s neighbors urged European countries at a conference of foreign ministers and representatives from 40 nations to open their doors to more refugees, and for immediate financial and technological help as their infrastructures buckle under the massive influx of civilians fleeing the conflict.

More than 3 million people have fled Syria because of the conflict, mostly to neighboring countries. Another 6 million are displaced within Syria.

The conflict began with largely peaceful protests in March 2011 calling for reform. It eventually spiraled into a civil war as people took up arms following a brutal military crackdown on the protest movement.

Islamic extremists including foreign fighters have joined the war, playing an increasingly prominent role in the conflict. Thousands have died in battles between opposing rebel groups since the beginning of the year.

In the northwestern province of Idlib Tuesday, members of the al-Qaida-linked Nusra Front and the Jund Al-Aqsa extremist rebel group clashed with members of the moderate Syrian Revolutionaries Front, an affiliate of the mainstream Free Syrian Army, activists said.

Kanjo said the battles began on Sunday after a small group defected from the Syrian Revolutionaries Front and joined Nusra with their weapons. When the rebels tried to storm their office, Nusra Front and Jund Al-Aqsa intervened and launched a wide offensive on Tuesday capturing the seven villages.