Jake and Dorothy’s Café, a local favorite with a statewide reputation is celebrating 70 years of serving the kind of food that keeps people coming back generation after generation.

Jake and Dorothy Roach opened the café on June 12, 1948 with four tables and eight stools at the counter. They could serve 25 people.  Now the restaurant can seat 225.  Health problems forced Jake to sell the restaurant in 1977, but they kept it in the family. Daughter Kerry Roach purchased it and has been running it for the last 41 years.

“It’s evolved over the years. Separate areas have been added. It just worked, and I try not to change anything, because when it’s worked for this long, you can’t change things. That’s why it works,” Roach said.

It has worked well for Roach and her customers. Jake and Dorothy’s has won several awards over the years, but one in particular stands out to Roach.

“One of the biggest awards, I think, was being named ‘One of the Best Small-Town Café’s’ on the cover of Texas Monthly. When they asked to put us on the Texas Monthly cover, I thought, ‘That’s a dream come true,’ and the editor was actually our food critic so that was really great,” Roach said.

Current waitress, Angel Howell, has worked at the café off and on for 31 years. She says her favorite thing about the restaurant is “the energy” and she describes the atmosphere as “fun.”

“The customers are a lot of fun to talk to. They have a lot of information that you can’t get anywhere else. It just kind of  has that homey, ‘everybody-get-together’ feel,” Howell said.

Howell said it feels amazing to be a part of the legacy at Jake and Dorothy’s.

“Just this week alone, the excitement in the air from the customers and from the people that work here, it’s just been fun. It’s brought it all back. It’s amazing in itself just for a restaurant to survive 70 years. Honestly, the restaurant business is one of the hardest to make survive and for Kerry to be able to do it for as long as she has, I mean, that’s amazing,” Howell said.

“It reminds me of the old days. You can go and get food anywhere, but you don’t get the atmosphere and the feelings you get when you come to Jake and Dorothy’s,” Jones said.

Jones has been coming to eat at Jake and Dorothy’s since the 1970s. She said she loved working there because “it felt like you were working with family.”

Roach said Jake and Dorothy’s is all about “home-cooking” and says it’s like “one big family and it always has been.”

Roach said it feels “monumental and historical” to celebrate 70 years of the business. 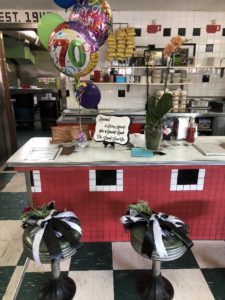 Balloons, flowers and a card were left for Kerry Roach by  the staff Jake and Dorothy’s. The roses on the stools are in honor of Jake and Dorothy Roach who always sat in those same stools. Photo by Ashley Inge

“It’s been a long and bumpy ride. I just have never given up and I’ve seen a lot of changes in the 41 years I’ve been doing this. There’s lots of changes with the people and the employees. The workforce is different,” Roach said.

Roach is most proud of the homecooked food that Jake and Dorothy’s has always served over the years.

“It’s not out of a package and I’m going to keep doing it that way, well, forever I guess. My daddy always said, ‘As long as there’s an Idaho potato, there will never be instant potatoes in this building,’ and pretty much that’s how it is. We serve Idaho potatoes only and that’s the way to do it,” Roach said.