On Sep. 17, Tarleton student, Jamie Richards Hogland, returned to Stephenville for the first time since December when she was shot in the face while in her off-campus apartment, leaving her paralyzed.

“It was emotional but bittersweet being back home on campus,” Jamie said.

While Jamie visited Tarleton, she met with friends and administrators. People surrounded her with support and shared encouraging words to keep Jamie fighting.

“They said they have been praying for me and to keep on going,” Jamie said.

She is still enrolled in school, taking an online class, while continuing rehab near her hometown.

“I want to share my story with anyone who wants to listen but I really want to graduate and start working in the Psychology field. My plan is to help children through therapy,” Jamie said.

Jamie Hogland and her parents, Jessica and Eddie, were invited to be on the Today Show and traveled to New York in late August. The Hogland family got to share Jamie’s story in light of inspiring others. What has kept them all from giving up is their faith. 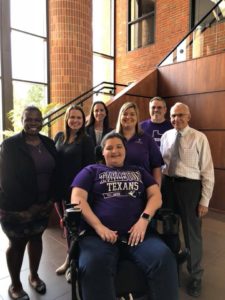 Jamie Richards Hogland returns to Stephenville and Tarleton for the first time when she was shot in the face while in her off-campus apartment, leaving her paralyzed.
Photo by Facebook.

“I don’t want people to give up. If there’s something you want, you should get it because life is short,” Jamie said.

Interviewed on the “Today” show, Jessica said, “She just keeps pushing herself and I love that she wants to get out and share that with others in the world to give them a sense of hope.”

Jamie cannot feel below her collarbone, but can move both of her arms and use her right hand. She hopes one day she is able to walk again.

Interviewed on the “Today” show, Eddie Hogland shares what Jamie’s surgeon told him, his wife, and Jamie in the hospital room that day.

“We need to video this because no one will believe it. It’s going to be a miracle that she will be able to walk,” Eddie said.

Jamie and her family returned to Stephenville for the trial of Shawn Layton, the man who allegedly shot her in a drug deal gone wrong.

Both the jury’s guilty verdict deliberation, along with consideration of the sentence, took less than 20 minutes each.

Many people all over the world have heard of Jamie’s story, even the United Kingdom.

“I feel blessed to share God with millions of people through my story,” Jamie said.

A donation page was created on behalf of Jamie’s recovery. Donations can be made at https://www.gofundme.com/help-jamie-richards-heal.