It’s that time of year again when students can’t walk from one side of campus to the other without someone telling them to vote for them in the student government elections. With the implementation of more senator seats this year, campaigning will be full of even more students running. 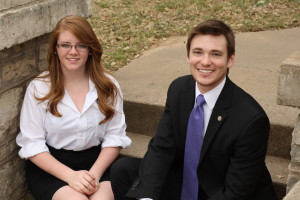 Johnson will be graduate in May with a bachelor’s degree in political science and will return to Tarleton in the fall pursuing his master’s degree in management and leadership. Johnson is president of Tarleton Alternative Transportation and a member of Kappa Delta Rho. He has been involved with SGA all four of his years, beginning in the Freshman Representative Council, SWAT House Representative, COLFA senator and more recently as the vice president of Academic Affairs and Chief Justice. This will be Johnson’s third time to run for student body president.

Byrd is a junior biology major and has been a Residential Leader for the past two years as well as a member of Alpha Gamma Delta. She has been involved with SGA all three years of her Tarleton career going from FRC, House member, vice president of unity and currently she serves as the vice president of FRC.

In an interview with Johnson and Byrd they discussed that the focus of their platform would be transparency, interaction and better representation.

This pair of running mates’ biggest push is to make SGA more visible to students on campus. They want students to know what’s going on within SGA so they can come to SGA with their issues on campus, which will allow SGA to be able to work on those issues.

They want more communication with the student body whether it is face-to-face or through social media. The issues they listed that might be of interest for them to work on next year would be trying to initiate a library trial run for longer hours, better recycling on campus and making the interaction between SGA and the student body stronger.

Although they are the only pair running for president and vice president this year, they will still be campaigning alongside the senators from March 24 to April 7. They will still speak to campus organizations but rather than a persuasive approach to their platform, it will be more informative of their plan of action for the next year.

SGA has added a few more senator spots this upcoming year, making three seats for each college, three athletic seats, three Greek seats and three graduate seats. When asked what they thought about the new senator seats, Johnson said, “I think it’s a great idea.” They are very excited to see how the new arrangement of senators will help reaching out to their constituents a lot easier and more efficient.

Students will vote for president and vice president, their college’s senators, and their Greek senators, if they are a part of a Greek organization. Voting begins April 7 and will end April 9 at 4 p.m. Also on the ballot will be Mr. and Ms. TSU. Students will vote on OrgSync.com using their student credentials and finding the SGA elections page. Voting can be done on any device, on or off campus.