Jordan seeks proof captive pilot alive before any IS trade

By Karin Laub and Elaine Kurtenbach—

AMMAN, Jordan (AP) — Jordan on Thursday demanded proof from Islamic State militants that a Jordanian pilot they are holding is still alive, despite purported threats by the group to kill the airman at sunset unless an al-Qaida prisoner is freed from death row in Jordan.

The militants’ deadline passed without word on the fate of the pilot, Lt. Muath al-Kaseasbeh, and a fellow hostage, Japanese journalist Kenji Goto.

Goto’s wife Rinko, who had kept silent up to now, made a desperate plea for her husband’s life Thursday and revealed that she has exchanged emails with his captors.

“In the past 20 hours the kidnappers have sent me what appears to be their latest and final demand,” she said in a statement. She said that if the al-Qaida prisoner, Sajida al-Rishawi, was not released by sunset, “the Jordanian pilot will be executed immediately.”

“I beg the Jordanian and Japanese government to understand that the fates of both men are in their hands,” she wrote.

Jordan has offered, in principle, to swap al-Rishawi for the pilot, but has made no mention of Goto.

On Thursday afternoon, Jordanian government spokesman Mohammed al-Momani suggested any possible swap was on hold and said al-Rishawi was still in Jordan.

Jordan, a staunch U.S. ally in the region, faces difficult choices in the hostage crisis. Any swap with the Islamic State group would run counter to its tough approach toward Islamic extremists, but it also faces domestic pressure to bring the pilot home.

The purported threat to kill the pilot came in an audio message posted online late Wednesday. The message was read in English by a voice the Japanese government said was likely that of Goto. It warned that the pilot would be executed unless al-Rishawi is delivered to the Turkish border at sunset, Iraq time. It was not clear what Goto’s fate would be if the woman is not released.

The Associated Press could not independently verify the contents of the recording, which was distributed on Twitter by Islamic State-affiliated accounts.

Al-Rishawi has close family ties to the al-Qaida branch in Iraq, a forerunner of the Islamic State group, and was involved in deadly Amman hotel bombings by al-Qaida a decade ago. Her explosives belt failed to detonate. She was arrested shortly after fleeing the scene and was sentenced to death by hanging.

The hostage drama began last week with the release of a video by the Islamic State group showing Goto and another Japanese hostage, Haruna Yukawa. 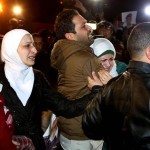 A man comforts the wife, right, of Jordanian pilot, Lt. Muath al-Kaseasbeh, who is held by the Islamic State group militants, during a protest in front of the Royal Palace in Amman, Jordan, Wednesday, Jan. 28, 2015. Jordan on Wednesday offered a precedent-setting prisoner swap to the Islamic State group in a desperate attempt to save a Jordanian air force pilot the militants purportedly threatened to kill, along with a Japanese hostage.
(AP Photo/Raad Adayleh)

They were kneeling in orange jumpsuits between a masked man who threatened to kill them within 72 hours unless Japan paid a $200 million ransom. That demand has since shifted to one for the release of al-Rishawi.

The militants have reportedly killed Yukawa, 42, although that has not been confirmed.

Goto’s wife wrote that her husband’s captors contacted her for the first time by email on Dec. 2. “Since then, there have been several emails between the group and me as I have fought to save his life,'” she wrote.

“My husband and I have two very young daughters,” she said in the statement.

“Our baby girl was only three weeks old when Kenji left,” she added. “I hope our oldest daughter, who is just two, will get to see her father again. I want them both to grow up knowing their father. My husband is a good and honest man who went to Syria to show the plight of those who suffer.”

Both Japan and Jordan have scrambled to deal with the crisis.

Any swap with the Islamic State group would set a precedent for dealing with the hostage-takers.

The group has not publicly demanded prisoner releases before. Previous captives may have been freed in exchange for ransom, although the governments involved have refused to confirm any payments were made.

Jordan’s main ally, the United States, opposes negotiations with extremists. Jordan is part of a U.S.-led military alliance that has carried out airstrikes against the extremist group in Syria and Iraq in recent months.

At the same time, Jordan’s King Abdullah II faces growing domestic pressure to bring the pilot home. The pilot’s family has staged protests, complaining the government is not doing enough to win his release.

The pilot’s capture has hardened popular opposition among Jordanians to the air strikes, analysts said.

Al-Kaseasbeh was seized after his Jordanian F-16 crashed in December near the Islamic State group’s de facto capital of Raqqa in Syria. He is the first foreign military pilot the militants have captured since the U.S. and allies began striking the Islamic State more than four months ago.