LITTLE ROCK, Ark. — A federal judge in Arkansas approved a settlement Friday that pays $84.9 million to 5,500 trucking companies who were cheated out of promised rebates by Pilot Flying J, the nation’s largest diesel retailer.

The settlement doesn’t put to rest a federal investigation in which seven company employees have already entered guilty pleas.

Attorney Aubrey Harwell Jr. of Nashville said Jimmy Haslam, owner of the Cleveland Browns and CEO of the truck stop chain, had no knowledge that employees were cheating customers. The company is co-owned by Haslam’s brother, Tennessee Gov. Bill Haslam, who has said he isn’t involved with its operations. 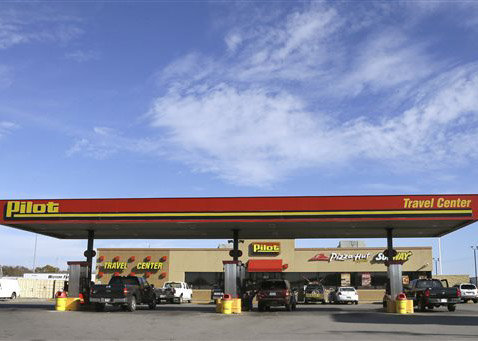 In this Nov. 20, 2013 photo, motorists stop for fuel at a Pilot Travel Center near North Little Rock, Ark. Representatives of the nation’s largest diesel fuel retailer are to be in court Monday, Nov. 25, 2013 in Little Rock for a settlement hearing in a $70 million lawsuit by customers who the company acknowledges were cheated out of rebates. Pilot Flying J, owned by Cleveland Browns owner Jimmy Haslam and Tennessee Gov. Bill Haslam, reached an agreement with nearly 6,000 customers who are to be paid with 6 percent interest, if the pact gets final approval.
(AP Photo/Danny Johnston)

U.S. District Judge James Moody said Friday that he was satisfied that the settlement was fair, reasonable and equitable.

“I don’t have any reservation about giving final approval here,” Moody said at the end of an hour-long hearing in Little Rock.

Moody also approved another $14 million in fees that will go to the truckers’ lawyers.

The settlement reimburses trucking firms for their losses, plus 6 percent interest, which is calculated from the time each rebate should have been paid. The cheating dates back to 2005.

Lawyers on both sides stressed that no one among the 5,500 companies agreeing to the settlement filed an objection and that only about 1 percent of affected companies opted out of the agreement so they could file their own lawsuits.

Don Barrett, an attorney for the truckers, said the settlement makes his clients whole.

“What Pilot was required to do was done well and … honorably,” Barrett said.

Pilot Flying J conducted internal audits after the chicanery came to light in April and, according to Harwell, started reimbursing customers prior to a settlement being reached. An independent auditor verified the company’s findings.

The truckers’ lawsuit alleged a variety of violations, including fraud, unjust enrichment, fraudulent concealment, breach of contract and other claims, all of which were dropped with the settlement.

Pilot Flying J has annual revenues of about $30 billion.

Prosecutors alleged in court documents that the scheme to cheat customers out of rebate and discount money was well-known among sales staff. Plea agreements allege that sales staff took part in a training session that taught employees how to defraud trucking companies without getting caught.