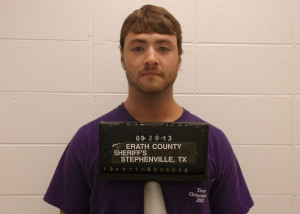 Kappa Delta Rho Consul Joshua Clark Simmons, 22, was arrested Friday, Sept. 20 on a charge of purchasing or furnishing alcohol to a minor. Lt. Doug McClammy of Stephenville Police Department says officers responded to a call about a party going on at 10:40 p.m. on the 400 Block of E. Long St.

Simmons was taken to the Erath County Jail, where he was released the morning of Sept. 21 on $1000 bail.

The national headquarters of Kappa Delta Rho said they had not heard about the arrest and have no comment at this time.

Rachel Peoples is a junior broadcast journalism student from Weatherford, Texas. She currently serves as the Distributive Reporting editor for Texan News Service.